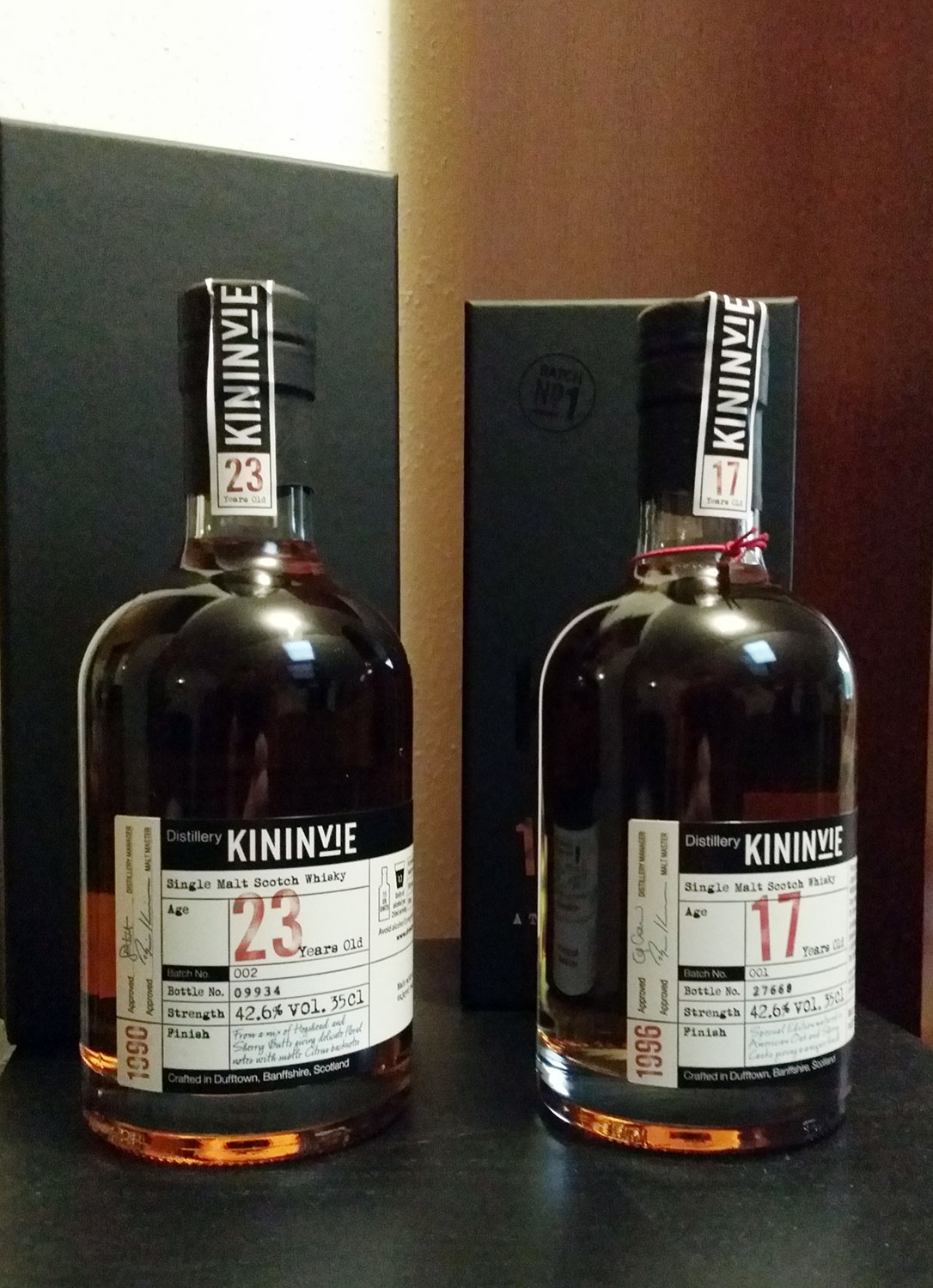 Last weekend I got the chance to taste the Kininvie 17 + 23-year-old releases while visiting malt mate Keith Wood for a dramming session (or two). Oliver Klimek also popped over and we had a great chat about both malts (and possibly a few more). You’ll find my tasting notes below – a tad shorter than usual due to the handwritten notes. 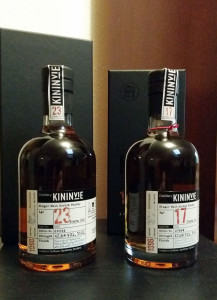 Tasting notes:
The nose has baked apples with walnuts and hints of vanilla pods, slightly sour apples, milk toffee, a hint of fruit cake with spices – rich and sweet, a tight christmas-cake mix, with bitter Kiwi kernels in the background. The palate is quite different. green apples with peel, Kiwi, gooseberries, quite mouth-coating. A hint of acetone emerges upon adding water (disappears soon afterwards). More bitter apple peel and dried oranges. The long finish is also huge on the apples (including apple sweetness), orange peel – quite zesty, long and light.

Verdict:
Overall not very consistent, the nose was the best aspect of this whisky for me, but the strange sour apple note is not exactly my style – a point all three of us tasters agreed upon. An easy-sipping dram, far too expensive for what it has to offer, even if you got a full bottle, which you don’t (it’s 35 cl). You pay for the novelty…

Tasting notes:
The nose is quite a bit darker, with more oak and not as “green” as the 17-year-old version, albeit quite closed down and inaccessible. Chocolate biscuits, musty sherry cask, a whiff of dark chocolate and a hint of what can only be described as air emerging from a coal cellar. Very hard to pick out individual aromas and water doesn’t really help either. The palate has more of the same to offer, and it’s a bit “strange” for want of a better word. Once again, quite a closed-down dram, very difficult to make out individual notes. There are liquorice, dark cherry with kernels, again a musty sherry cask and shrooms. Yep, mushrooms. I don’t know who came up with the term, but the three of us agreed on it being “a mess”. A quaffable mess nonetheless. The long finish is slightly alcoholic upon swallowing despite the low-ish ABV, with dark fruits and, once again, a musty sherry cask note.

Verdict:
Well, the 23-year-old got one point more than the 17-year old in the end because it didn’t feature the sour apple note and the darker notes are a bit more pleasing. In the end Oliver Klimek described the whisky as “white noise”, that’s bang on! Very drinkable, quaffable and pleasant enough but it just fails to make a lasting impression.

Overall:
Everyone wanted to try Kininvie, the “shy” and largely unbottled (on its own) malt distillery by William Grant and Sons, producing malts for their blends. After many years of waiting they released the first batches of single malt in 2014 – half bottles at very high collector’s prices. As far as the whisky is concerned – get yourself a sample of each, then you can tick that distillery off your “to try” list. At the current prices and after examining the quality, which is more like a somewhat generic yet pleasant enough base-malt for blends, I personally see no point in picking up either of them. Get a bottle (or a case) of Monkey Shoulder Blended malt instead…