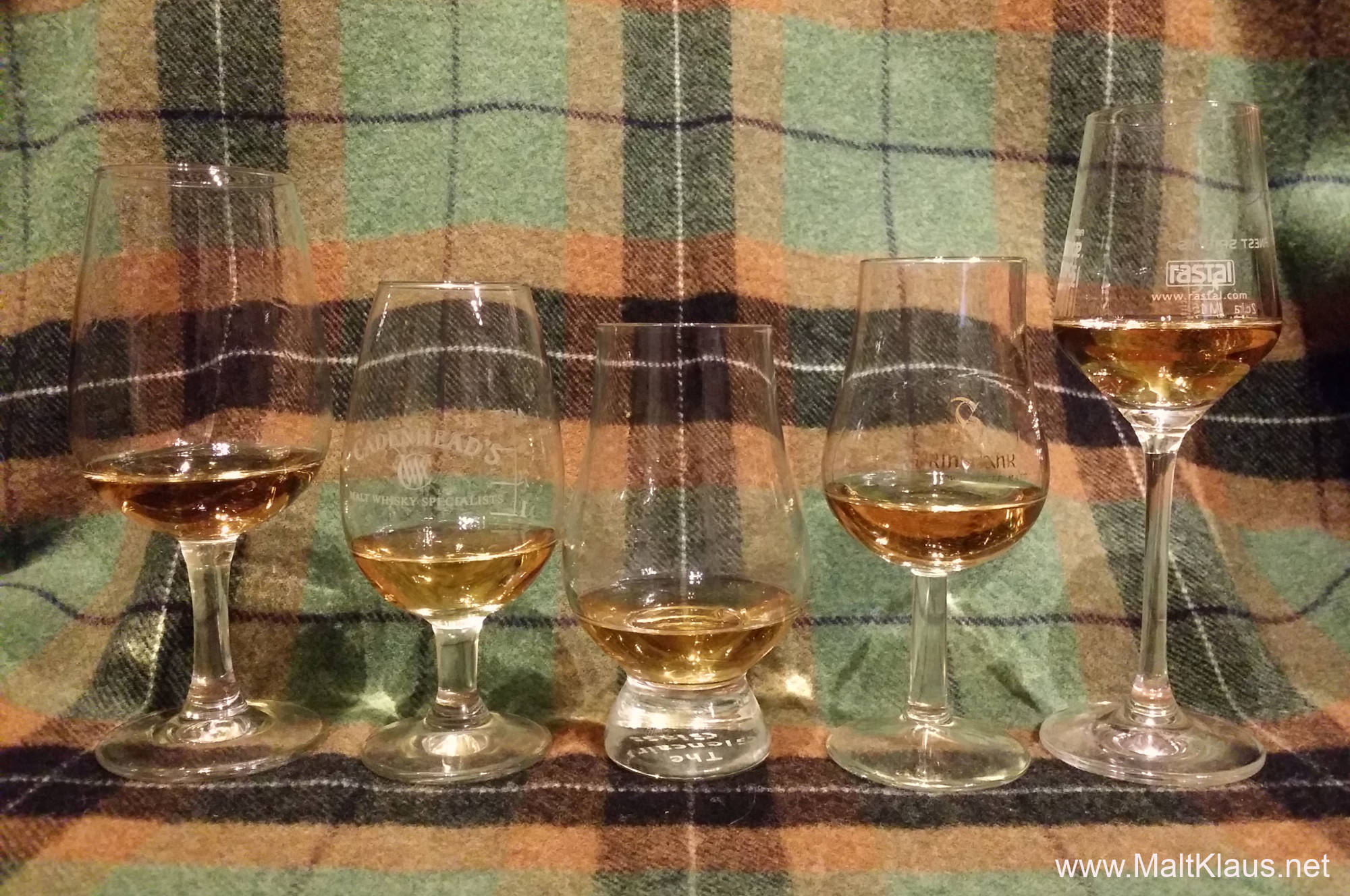 “Which kind of glass would you like – Glencairn or Classic Malts”? That question, by malt mate Keith Wood, ignited a thought process in my mind. I was sitting in his dramming den, relaxing in a comfy leather armchair, when he hit me with the question of all questions. Up until this point, the “classic”, specially designed and sturdy Glencairn crystal glass had been my go-to whisky glass I always reached for. The first time Keith asked me that question I, naturally, wanted a Glencairn. On my second visit, I tried a Classic Malts glass for the first time after a long break. It was certainly a very good whisky glass and I enjoyed my drams from it. And then my mind started to wonder: Which one is really the best whisky glass for me? Avid readers of my blog will know I used a Classic Malts-style glass for my first couple of reviews, I actually don’t remember why I switched.

Thus it is high time I methodically compared some of the different kinds of whisky glasses I have at home with different malts to see if there are differences, and if so, how big they are. And, just maybe, I’ll choose a new standard whisky glass going forward. This test of course only reflects my own opinion and other people might come to different conclusions, but I’ll try to keep the descriptions as universally usable as possible.

Deliberately leaving out all kinds of fancy one-off branded glassware and other glasses I know not to be very good (the smaller half-size “Glencairn-style” ones you often get at distilleries come to mind) I chose four classic glasses to compare and added a fifth, odd-shaped one as a sort of “control-glass” that just has to be different.
Now, you might be asking why I didn’t include new bespoke whisky glasses, which have appeared on the market recently. The reason is simple: Without trying them first my inclination to shell out 20+€ (even more including shipping) for the next hot thing on the glassware market is rather low, when standard glasses, which work perfectly fine, are between 3€ and 6€ (and sometimes “free”), so I don’t have any of those to test, sorry. Besides, this should really be a test of classic, well-known, widely used styles of whisky glassware. 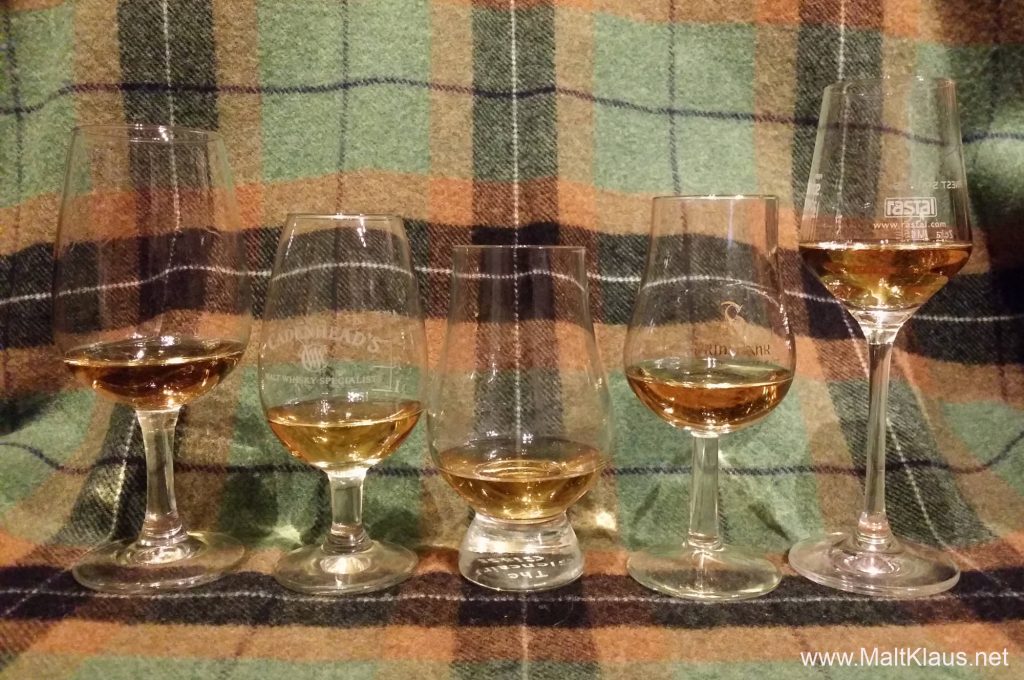 The glasses are: (from left to right in the picture)
1. Classic Malts-style: This specific one is not a Classic malts glass, but the shape and dimensions are the same, I measured it against online descriptions of the Classic Malt branded glass. (I will have to order some “genuine” ones soon…). This is the largest glass in the lineup and this style has been around for quite a few years and is well-regarded.

2. Copita: A classic shape used by whisky blenders, apparently derived from sherry glasses. A more narrow glass and the one with the smallest brim diameter in the lineup. I have several different ones, all with minor variations – give or take a mm here or there, but I have settled for a Cadenhead’s branded one in the standard blender’s glass shape.

3. Glencairn: rounded at the bottom with straight sidewalls towards the top of the glass, this is a different shape than the first two. Another (newer) classic style of glassware

4. Stemmed tulip-shaped nosing glass: I have no idea what this style or brand is actually called, it’s not unlike a Bugatti glass, but with straight sidewalls at the end. You could also call it a slightly smaller Glencairn on a stem. Another classic style you encounter quite often, this specific one is a branded glass by Springbank.

5. Rastal Harmony. This is the “control-glass” in this lineup with a very different shape of the sidewalls. It’s also the smallest glass in the comparison. I got it at a whisky festival last year and wasn’t very convinced then, but I had no comparison at the time. Let’s see how it holds up.

The way I intend to do this comparison is straightforward: I will use three different whiskies of three different styles (unpeated triple-distilled, heavily peated, sherried). 20ml will be poured into every glass. I will compare the glasses immediately after pouring, a few minutes in and then after ten or even more minutes. The glasses will be judged by nosing comparison and I will then assign points to each glass – the best one gets five points, the worst glass one point. At the end we’ll see which one came out on top.

The Classic Malts style glass delivered the best performance for this 12-year-old Hazelburn, defining both the light and the dark aromatic components over a long period of time. The Glencairn was a close second, but it showed a bit more change in the whisky as time went on, progressing from a fresher to a darker style. The Copita stayed consistent throughout, but with more alcohol than I would’ve liked. It probably works best when used for evaluation of diluted whisky samples? The other two glasses were not as impressive overall, with the Rastal sadly being very one-dimensional and not suitable for this style of whisky.

For the sherried Speyside whisky the Classic malts-style glass is ever so slightly better than the Glencairn, rendering a few nuances and details in better definition, but they are very close – I can’t see a difference in scores using either of them. The Copita was too alcohol-driven to suit the style of the whisky and the Rastal glass was no match for the two winners.

No real surprises there in the third round – Classic malts-style and Glencairn are the clear winners!

WOW! Now that was the most fun and interesting whisky-related experiment I’ve done in a long, long time. And boy am I glad I did it! Never would I have thought to experience such differences between different styles of glassware, especially the four widely used ones! Let’s do a quick count, ranking the glasses:

Looking back on my experiences, the biggest glass, the Classic malts-style one, offered the quickest results, a very consistent performance even with a whisky in the glass for 30+ minutes and a great definition and balance of the flavours in all three glasses. Alcoholic sting was minimal, which I really liked. A very close 2nd place goes to the Glencairn glass. It needs a few more minutes to reach peak performance with all the whiskies I tested, but manages to hold that level. Separation of aromas is also very good, but it has a tendency to accentuate alcohol and lighter aromatic components more than the winning glass. Because of that, the Glencairn might perform better for standard whiskies at 40% ABV – something I will need to try another day.
There’s a huge performance gap following these two glasses. Both the tulip shaped one and the Copita have their faults. The Copita was consistently too alcohol-forward for me in direct comparison and the tulip shaped one was a bit too muted, accentuating the darker aromas while suppressing the lighter and peaty ones.
And then there’s the last place for the control glass. This is widely sold as a whisky glass, but I cannot recommend it for this purpose. It renders aromas differently than all the other glasses, muting them overall while accentuating herbal/spicy/vanilla-style components. This could work well for clear spirits – but, sorry, it’s not a whisky glass – for me at least.

So, going forward this comparison has a few consequences for myself: I will retire my copitas and tulip-shaped stemmed glasses to the display cabinet. For my tasting notes I will change my standard glass, using the Classic malts-style one going forward (again…) – and I will get an “original” one soon, even though I don’t expect it to be different in performance to my unbranded same-style one I got as a freebie from an online whisky merchant. Free stuff can be good! If you see distillery-branded Glencairn glasses (I buy one at every distillery I visit) in my future pictures accompanying tasting notes, these will mainly be used for the sake of taking the picture, unless I find them to work better for a particular whisky.
For my regular (non-tasting) dramming I will continue to use my cut crystal Glencairn glass. I just love the look of the crystal glass and the weight and heft of it. Now if they only made these Classic malts glasses in great quality crystal glass – possibly also mouth-blown….

What do you think? Which whisky glass(es) do you prefer? Let me know in the comments section below!

11 Replies to “Which one is the best glass for whisky? A test”