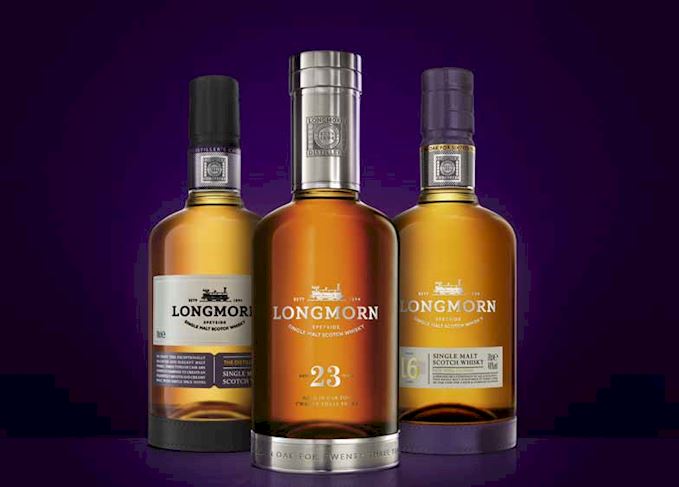 It was only a matter of time until someone tried to follow what Diageo started when they premiumised their Mortlach distillate, introducing a whole new range of half-litre bottles at excessively high prices and posh packaging. They even introduced a brand ambassador, responsible for Mortlach, Georgie Bell. Well, two years later, Georgie moved on to Bacardi and it seems the position of a Mortlach brand ambassador will not be filled again. Signs of a failed experiment of premiumising a distillery which is mainly used in blends and was virtually unknown to supermarket malt whisky drinkers? Maybe, we can’t tell for sure without knowing the sales figures. Personally I don’t know too many people who bought any of the new Mortlach releases…

And now there’s this: Longmorn owner Chivas Brothers just announced a new range of Longmorn bottlings. The “Distillers Choice”, which replaced the old (and up to this point only official bottling) 16-year-old a few months ago, will be joined by two new expressions: A 16-year-old and a 23-year-old.
Good news? Well, not so quick. Let’s take a detailed look here!
The old Longmorn 16 cost 56,90€ when I last bought a bottle a year ago, an adequate price for a good whisky. The last bottles of this expression can be had for about mid-60€ prices if you look around a bit. The new “Distillers Choice”, a weaker bottling (40% ABV vs. 48 for the 16-yo) retails for the same price. To us whisky lovers it’s obvious which bottle we buy, as long as we still have a choice. Well, that choice will soon be gone. Here are the prices for the two new whiskies:

Well, I don’t know about you, but that sounds excessively expensive in my book. This looks exactly like the Mortlach rebranding two years ago. Replacing a previous 16-year-old with a four- to five times as expensive version takes some balls and is not resonating well with those who previously bought this bottling. Just take a look at social media – I have read countless negative comments, but not one single positive one. (Let me know in the comments section if you’re happy to buy one at this price. I’m serious!)
And, well, do I even need to comment on the price of the 23-year-old?

Here’s the thing: I’m sure both are lovely whiskies (and I’d love to taste them if I get the chance to), but this premiumisation of a simple brown spirit drink like whisky is getting more and more ridiculous by the month! Many whisky drinkers, myself included, feel priced out of the market and treated like cows on the milking stand. This is, in my opinion, a very dangerous road more and more whisky lovers leave, taking intersections to other spirits categories. Just recently at a whisky show, several merchants I talked to told me more and more previous whisky customers are now looking increasingly into categories like Rum, Cognac or Armagnac!

I for myself will enjoy that 50-something € bottle of “old” Longmorn 16, and when it’s gone, I’m going to look elsewhere – most likely the independent bottlers. There is no way you’re going to get me to shell out that kind of money for a 16-year-old standard expression. Not even if the stopper was solid silver. The proof for these new releases will be in the sales numbers.

At least there’s one positive note: The new bottlings are full-sized 700/750ml ones, not the reduced 500ml versions Diageo introduced when they rebranded Mortlach, which people took even more badly than the price!

//edit after publication: The official press release, which I found only after publishing, talks about 252$ and 1450$, respectively.

16 Replies to “The Mortlachisation of Longmorn”