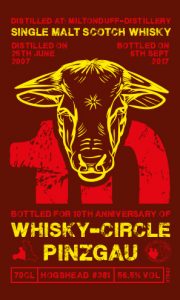 Oh boy, I’ve really let things slide a bit, it’s been a while since the last review. Let’s make it a special one then! Malt mate Rainer sent over a sample of a 10yo Miltonduff – bottled for the 10th anniversary of the Whisky Circle Pinzgau. Let’s dive in without further ado!

Tasting notes:
Colour: ripe straw
The nose … oh, that’s a strange one – in a good way. An olfactory puzzle. Initially, there’s a waft of alcohol, not surprising at 10 years of age, followed by “green” notes. Errr… caramelised cucumber? Is there even such a thing? Cucumber water with a pinch of vanilla, freshly cut herbs, green apples, rhubarb and apple-rhubarb pie. Told you it’s a strange one! Adding a few drops of water releases a waft of coconut with a few fruits trailing behind – slightly sour grapes and gooseberries! Let’s check the palate!

Spicy on the arrival – cracked pepper up front before the alcohol kicks in. Oily, mouth-coating and dry at the same time with notes resembling the nose – alcoholic cucumber water and apple/rhubarb pie with a pinch of vanilla. With a dash of water the pepper and alcohol are a bit restrained (but not much) and the whisky opens up, revealing more of the light continental fruits – a sneaky pear, gooseberries, grapes (with seeds!) and, oh, who put the lime in the coconut? (sorry…) The medium-long finish is peppery upon swallowing, slightly sweet yet mainly dry with vanilla, grapes, apples and, yes, alcoholic cucumber water.

Verdict: Ah yes, a “funny” dram – and an honest one! It doesn’t try to mask anything – it is a 10-year-old powerhouse from a refill cask, so it’s still very lively, fresh and gives you quite a kick. In a sentence, I’d say “alcoholic cucumber water eaten with a slice of apple and rhubarb pie”. Because you should have cake when you celebrate your 10th anniversary as a whisky club! Not as impressive as their previous bottlings, but in this day and age where it’s really difficult to get good casks, a more than solid choice!