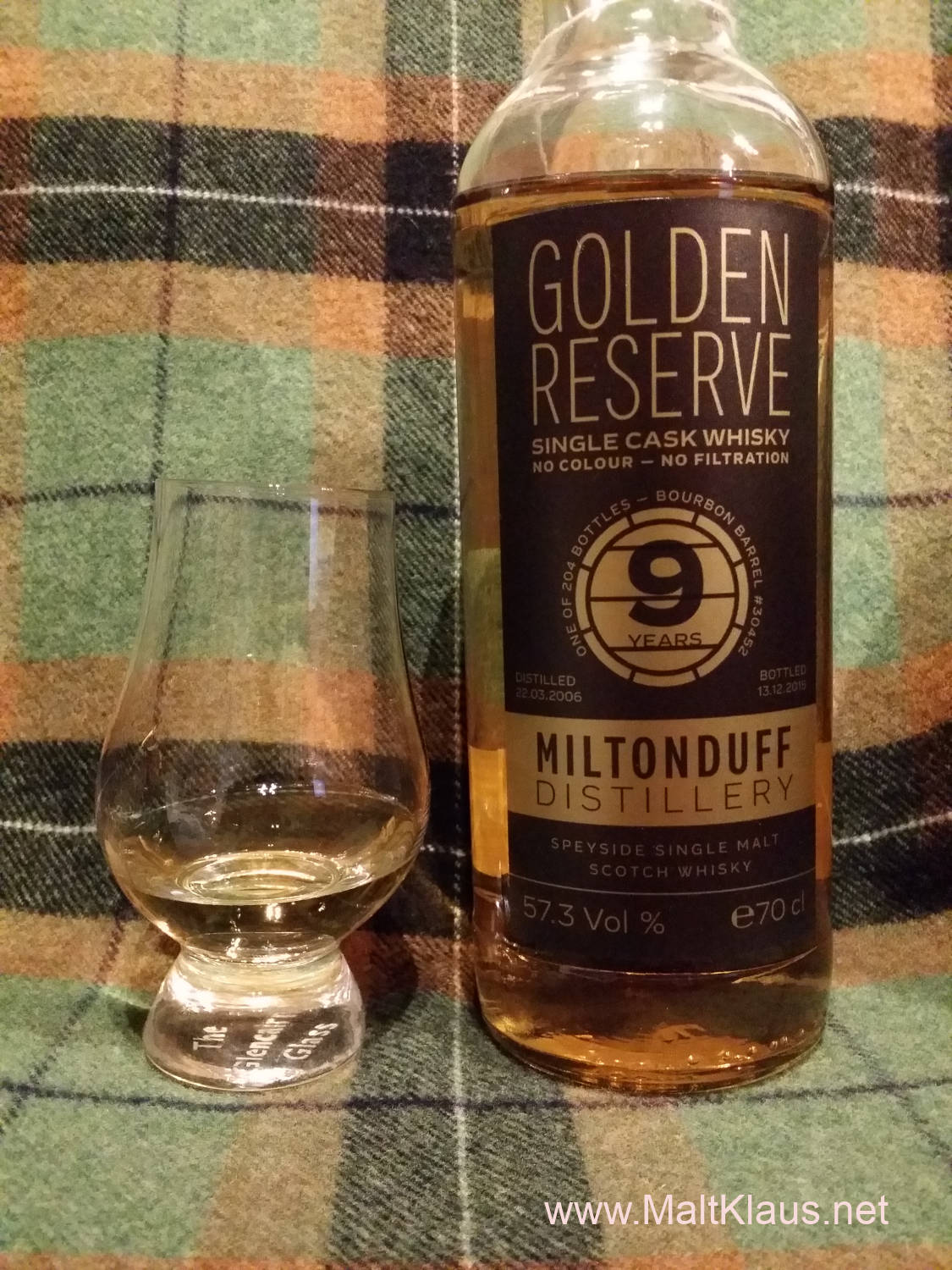 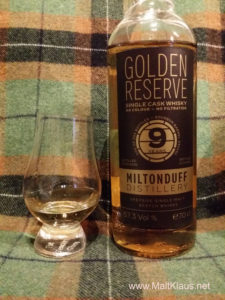 September’s almost gone and I’ve only managed to publish three whisky reviews (this one included) this month and no article in a while – sorry about that. Things have been quite busy during the summer and the decreased volume of posts is not a sign of me getting bored (only getting bored of high-class whisky prices, but that’s nothing new).
So to spice things up here’s a whisky review of a chance buy – an independently bottled single cask Miltonduff, bottled for an Austrian own-label whisky distributor in a range sold in Austrian supermarkets (no idea how widely distributed, just found it in a bigger one…). The market is definitely changing and I applaud the placement of indie bottles in stores to spice up the whisky shelf – if it’s a good one, as we’re about to find out…

Tasting notes:
Colour: pale gold
The nose opens on quite a hit of alcohol – no wonder at 57% ABV. Citrus peel, a hint of orange, apple pie prepared with green apples, slightly green mango, yoghurt with a hint of real vanilla and a touch of nuts as well as oak with wood smoke. With a considerable amount of water: Roughly the same profile, just a tad mellower and without the dominating alcohol. A bit more on the grassy/green side now, but this is still young, fresh and citrussy overall, yet not without substance. The palate is rich and mouth-coating on the arrival, slightly sweet (vanilla and caramel sweetness from a rather fresh cask) at first, with the alcoholic citrus-laden kick (and what a kick it is!) only setting in after a few seconds. A strange nutty/metallic/off-oaky slightly displaced note I’m not too chuffed about in the background. Let’s try it with water: Quite a bit more mellow, still mouth-coating with vanilla-caramel custard sweetness, but there’s that strange combination of nutty (brazil nuts), metallic, woody (oak from a damp cellar?) notes again, which I don’t really care for. What else? Dry 80% cocoa chocolate. Ho-hum. More for sipping than for savouring. The medium long finish is quite dry, grassy, slightly bitter-sweet with caramel, vanilla, wormwood, fresh rubber duck (that fresh rubber smell) and Brazil nuts .

Verdict:
Hm. Very long hmmmmmm… A young Miltonduff, not without character and richness, but too spirity, uneasy (like a hyperactive 9yo kid)  and with a strange note for my taste. It’s perfectly fine for casual quick sipping but every time I try to savour it, it goes south from there…
Usually the guys from Single Cask Collection do offer fairly nice drams you can’t really go wrong with. Maybe there’s a reason this is bottled under a sub-label with only a small address sticker on the back mentioning their company name? This range is also not listed on their website. I’m trying to wrap my head around why someone would place this in a supermarket. I just can’t see the still somewhat rough nature appealing to “un-geeky” people used to the standard 40% ABV drams, also because there’s a very cheap unlabeled cardboard box not exactly screaming high-end, but the price tag at just under 50€ is probably more than the average supermarket whisky purchasing person would spend for something this “obscure”. But that’s probably just the marketing side of me scratching my head. It is what it is – young whisky, sippable and not without character, but you can get better stuff for the money, even in a supermarket environment with mostly standard bottlings…