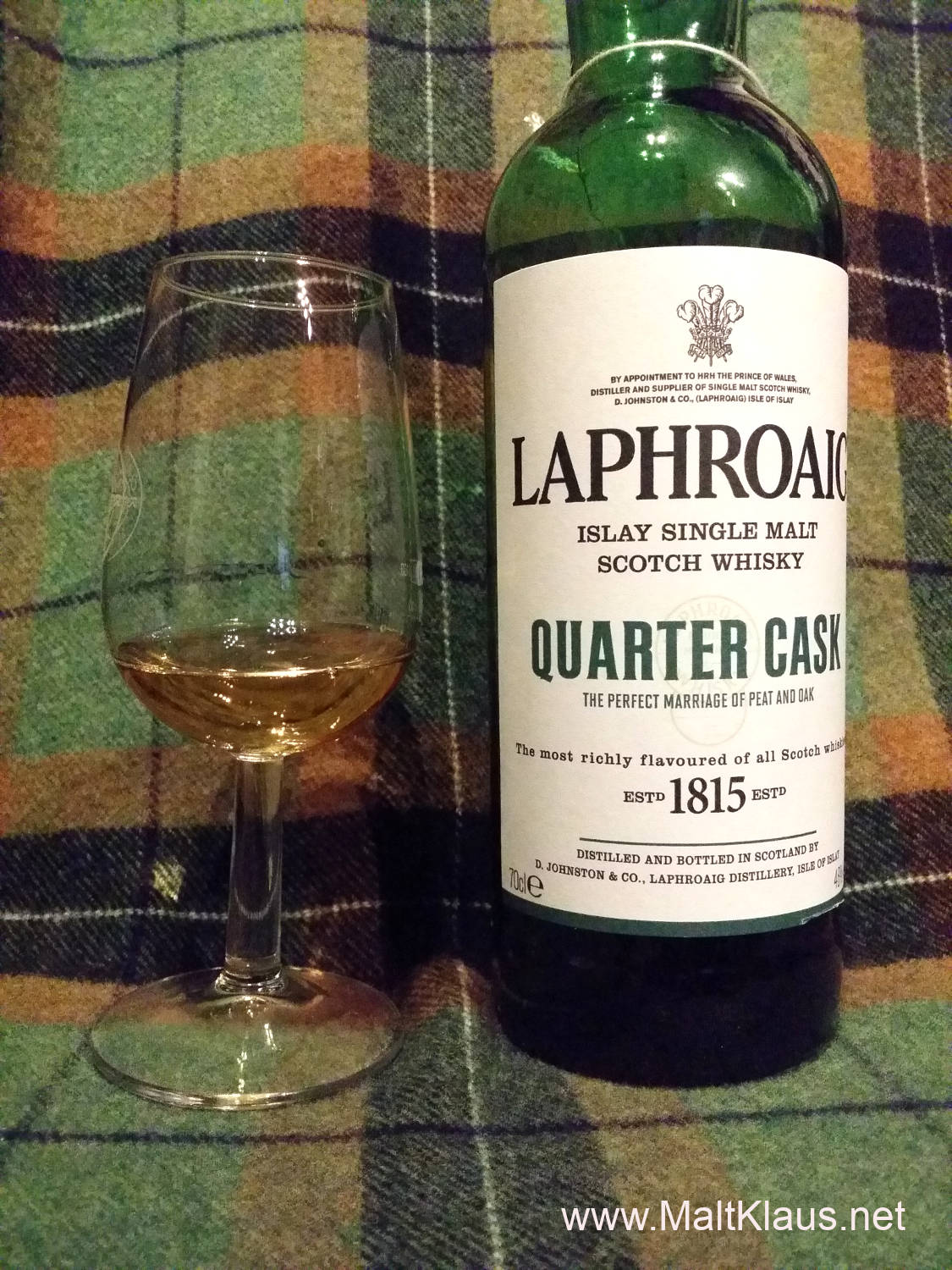 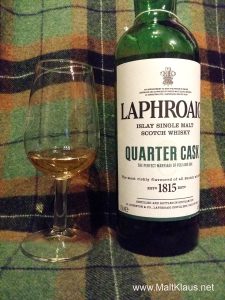 When I recently asked my twitter followers which kind of whisky they wanted to see reviewed most, the “daily drams” were pretty high up in favour. Well, in this review I’ll be introducing a whisky many of you will already be familiar with – but if you aren’t, and like peaty drams, you’ll be interested in this!

Tasting notes:
Colour: red-orange honey (coloured….)
The nose opens with a kick of peat smoke aromas in your face paired with sweet caramel and vanilla. The rather active quarter casks (smaller than a barrel) impart a lot of flavours in a comparatively short amount of time, making it a bit high on vanillin. The very active casks actually mellow the smoky aromas quite a bit – something you realise when you’ve tasted Laphroaig matured in refill casks, where the peat smoke can be much more medicinal. Nonetheless, we’ve got iodine bandages, burning hospital waste bins, a night around a damp peat fire, charred oak, a few spices (cloves and half a cinnamon stick), rich caramel, sticky toffee pudding with vanilla sauce (blasphemy!) and an earthy note underneath. Very rich and powerful with loads going on. The palate is very much in line with the nose. The 48% ABV are noticeable, but this does not scream for the addition of water at all. Intense peat smoke, iodine, cracked oyster shells, a pinch of salt and quite a bit of ground white pepper appear at first, before the sweeter toffee and vanilla notes as well as charred oak and slight spices appear. Rich, mouth-coating, intense. Not ultra-complex, but still very full-on. This might actually overwhelm beginners or those with an aversion to peat smoke. The long finish features some alcohol, chili, pepper and phenolic smoke right upon swallowing, drying down to reveal slightly dry, sweet (toffee and vanilla) aromas later on. If you don’t brush your teeth, the peat reek lasts until the next morning!

Verdict:
Well, there you have it. This is very peat-forward, oak-forward, ah, heck, all-forward, no-nonsense whisky. Maybe a tad too vanilla-sweet for my personal taste (I like dry, refill-oak-matured Laphroaig the most, if you haven’t guessed so already), but that’s just me. This is a staple in the Laphroaig lineup for many years, it has been on the market since long before single malts without an age statement started to become a, well, plague almost. If you’re asking me which affordable Laphroaig to get, I would recommend you to forget the very weak Select, also forget about the rather weak current bottlings of the 10-year-old and go straight for this bang-for-your-buck quarter cask.