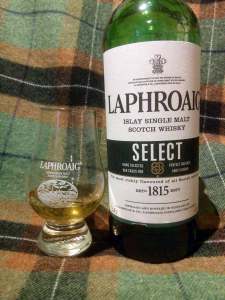 Tasting notes:
Colour: pale gold.
The nose screams “Islay” long before the glass has even reached your nostrils. The distinctive peat smoke immediately hits you once the cork is off the bottle. Let’s get a bit closer to the nose then. It’s Laphroaig, all right, all the necessary components are there: The signature iodine smoke, brine, salt, clams, seaweed. Fresh vanilla on top from the new American oak casks it was finished in, sweet vanilla pudding and some toffee in the background. A nice mixture between the smoky and the sweet components, yet not overly complex nor as intense as other Laphroaig bottlings. The palate confirms my findings. Definitely not as oily and thick-textured as I have come to know and enjoy Laphroaig. Signature iodine peat smoke, fresh cask spices, brine, seaweed rounded off with a pleasing vanilla-infused honey sweetness. A bit one-dimensional yet quite pleasing.  The finish is peculiar. Starting out peppery and oily with a nice mixture of dry and sweet components it is rather short-lived in the throat but it lingers much longer in the mouth with a dry, even a tad herbal briny sweetness.

Verdict:
This whisky carries the name “Select” because it should incorporate all the components of the different Laphroaig styles out there – Quarter Cask, PX Cask and Triple Wood married together in fresh American Oak barrels. What sounds like a great idea turns out to be a bit underwhelming. It feels like drinking an over-diluted Laphroaig 10 (which itself was better when it was at 43%…) with a bit more vanilla influence from the fresh casks. I can’t help but ask myself what the purpose of this dram in the Laphroaig lineup should be. Do they want it to be the entry-level bottling? I’m not sure – both can be bought in roughly the same price range and the way better Quarter Cask is only marginally more expensive than both. Should it be a “beginner’s Laphroaig” for those looking for less intense flavours? Again, I’m not sure. There’s enough iodine smokiness to put anyone off who’s not into this style of whisky. In the end it’s a pleasant and nice, easy-sipping whisky, but I’m just not sure of its purpose and see no reason recommending the Select over the Quarter cask or the signature 10-year-old.

(edit note: Edited the mark to 79 after publishing, I wrote this review over several samplings and decided to push it one mark under 80 in the final tasting without changing it on the site)

One Reply to “Tasting: Laphroaig Select”