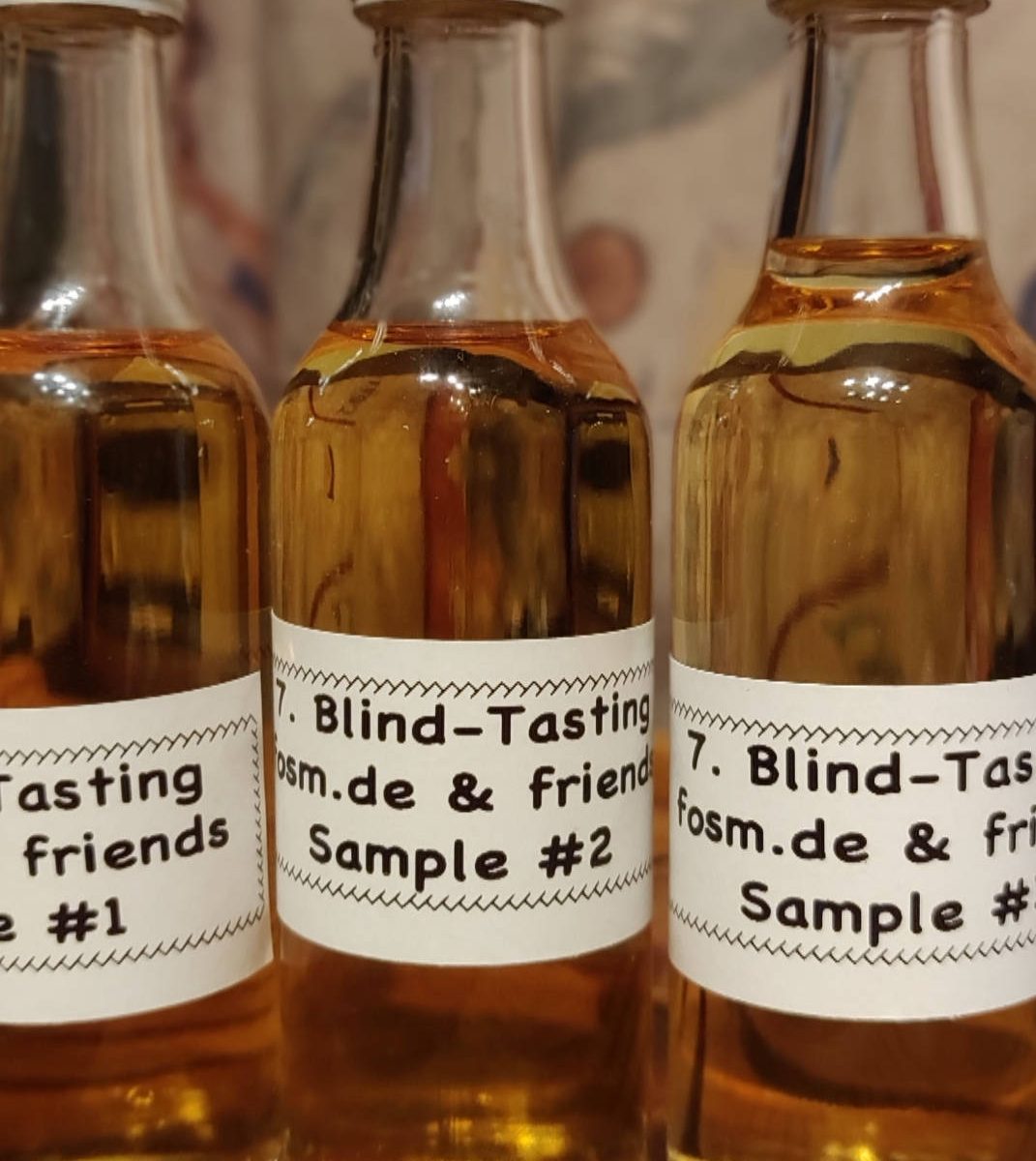 Type: Single Malt
Strength: 40-43%
Product: Standard bottling, about 10 years old
Notes: We’re off to a good start! A rich nose featuring “red” fruits, ripe apples, dried apricots, blossom honey, caramel pudding, a pinch of cinnamon and vanilla.
On the palate, it’s quite a bit more youthful and lighter, not as aged and settled – we’ve got green apples, not quite ripe apricots, malty sweetness and a light seed bitterness. A rather short finish with a hint of fruity sweetness and, again, light fruit-seed bitterness that transforms into a slightly yeasty note.
Well… rather nice but probably not more than a standard expression
(Score: In the high 70s)

Type: Single Malt, peated
Strength: 40%
Product: peat-smoked, young NAS bottling
Notes: Peat smoke on the nose! It comes intertwined with citrus, alcohol and… oh boy… there’s really not much else there – sherbet lemon perhaps. Probably still pretty young. On the palate, it’s rather subdued at first with a medium texture. Light peat smoke, vanilla, some caramel, some malt and a leathery component. Rather dry on the finish and not very expressive with soft peat smoke and a somewhat lingering herbal note. This one reminds me of the “ Peaty Tang” – at the very least it gives me the same level of enthusiasm (not).
(Score: Low 70s)

Type: Single Malt
Strength: 55+%
Product: Single Cask?
Notes: Oh yes, we’ve progressed to a higher league now! Complex on the nose – caramelized orange peel, red and yellow apples, papaya (with seeds), honey melon, a pinch of cigar tobacco, pepper and allspice. Full-on arrival on the palate – quite noticeable alcohol and pepper which take a while to fade. After that the whisky coats the entire mouth – the red apples are back and so are the caramelized oranges, the papaya (including the slightly bitter seeds), honey melon, some honey and just a pinch of spices. Adding a dollop of water tames the whisky without it losing its expressiveness. The finish is strong with alcohol, pepper and a slight fruity sweetness.
(Score: Mid-80s)

Trust your nose and your palate – go with what they tell you! In the end, I ended up guessing Tomintoul Distillery – which isn’t too far away from Glenfiddich, both in their standard product lineup and geographical location.
Ultimately, this blind tasting confirmed my feelings about Glenfiddich: A distillery that’s capable of producing very fine malts in high volume, but the way they bottle them they’re aimed at a different market. The 21-year-old could be really nice – if it were bottled at 46% but then it might be too strong for the regular “brand drinkers” that expect a very soft, mellow, dare I say “smooth”, product. So I can see how they try to position that one. The “fire & cane” bottling is one that doesn’t agree with me – it’s too young, too… uninspired for want of a better word, to me it feels unnecessary and gimmicky. Now, that third expression… that’s much more up my alley and one I would consider worthy of a purchase. Alas, it was only a cask sample that will most likely never be released like that…
So, yeah, great potential there even for more “serious” whisky lovers – I really hope to see higher-strength bottlings in the future, the quality of the spirit is there!

Thanks a lot to Peter Moser for organizing the blind tasting and to Markus Heinze for providing the sampled whiskies.

Have you tried any of the two expressions (obviously not the cask sample…) What do you think of them? What are your experiences with blind tastings? Let me know in the comments section below!