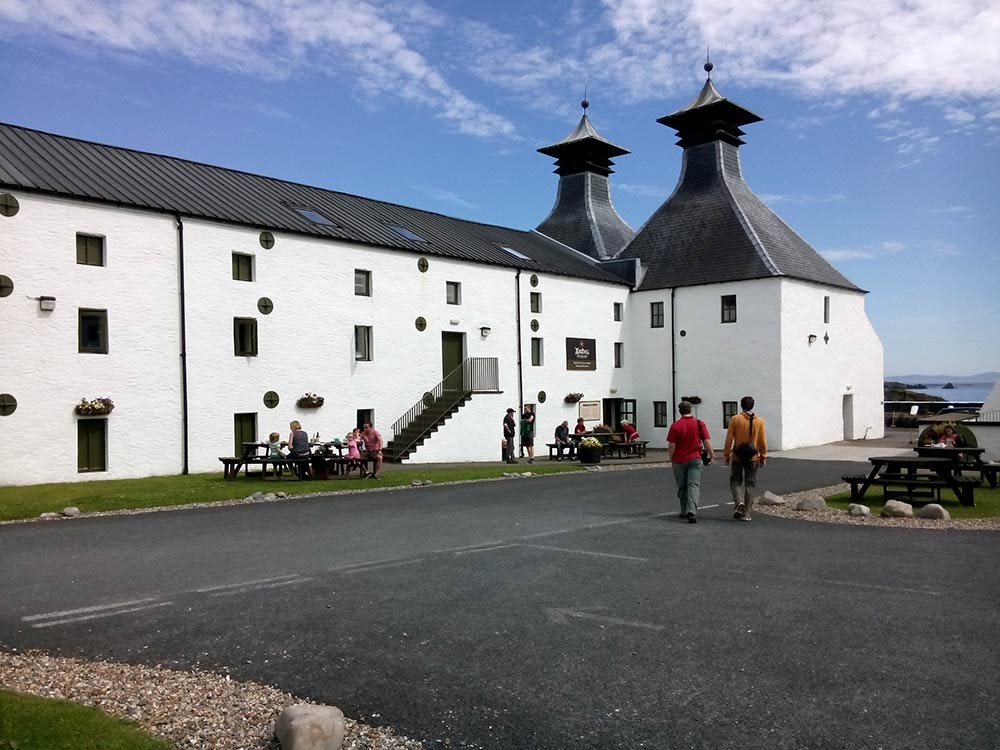 Even on a small island like Islay you can spend quite some time in your car getting to places – especially when you’re staying on the opposite end. Thus it only made sense for us three brothers to spend an entire  – hot and sunny – day touring all three distilleries in the south, starting early in the morning at Lagavulin.

Lagavulin, like Bunnahabhain, is a less “touristy” distillery. Not as posh and polished as others with a kind of “old-school” feeling to it. Old, simple, painted steel staircases, narrow paths – putting the working environment first and the tourist attraction last. The charming insides speak volumes about the decades and decades of use and the history of the place, as well as a need of investment in some areas. But, on the other hand, why bother, tourists aren’t allowed to take pictures anyway and Scots are known for being stingy 😉
Anyway, out tour guide for the day was a charming young lady named Sophie and we were in luck, it was yet another very small group. The tour certainly felt positively different from all the others, Lagavulin really has a special “feel” to it, probably due to the old-style, unpolished charm of the place and the narrowness full of nooks and crannies.

A few facts and figures about Lagavulin:
– The malt is peated to 35 ppm using Islay peat from a bog just outside Port Ellen, about 9-15 ppm left in the new-make
– They use two lochs as their water sources and haven’t run dry yet
– A unique way of mashing: Only two waters with only half of the wort going into the washbacks, the other half being used as the 1st water of the next mash. Maximum capacity is 28-30 mashes a week
– 10 washbacks (oldest from 1930), 5,5 hours apart in cycle, fermentation time is just 55 hours
– The spirit run is the longest on Islay at 10,5 hours in two narrow, thick, pear-shaped spirit stills with the lyne arms bent down. The cuts are still being made by hand.
– They’re replacing only parts of stills instead of the whole stills
– 2.3 million litres of pure alcohol per year, run by seven operators with only one (!) on shift at a time.

After touring the distillery Iain McArthur was already waiting for us to lead us into the warehouse on site for a chat and tasting. You can read more about the whiskies we tasted in this post. Iain is a charming wee guy full of knowledge and jokes – if you’re on Islay, attending one of his tastings is a must! Again, there were only five of us attending the tasting, so a very intimate group. Perhaps even a bit too intimate as the couple joining us wasn’t all that talkative. Anyway, carrying on. We had to take the chance and ask a few more in-depth questions , some of which are quite insightful. Here’s a short summary:

– They store 7.000 casks on site, 6.000 at Port Ellen and 3.500 at Caol Ila, the rest is shipped off to the mainland.
– casks are even re-charred three times, making them last 100 years and some casks are re-charred coming straight from the US
– According to Iain they’re even at 2.5 million litres production per year, 35% of which go into their Single Malt bottlings (our tour guide mentioned 95% go into Single Malt – I find Iain’s answer a bit more likely)
– According to him, nothing has changed, when I asked him about the peculiar mashing method and very short fermentation times
– In the 80’s Lagavulin shared the fate of many and was only operating half of the time filling only about 60 hogsheads a week

After waving goodbye to Iain and Lagavulin it was time to head down to Laphroaig. It’s almost impossible to enter their visitor’s centre without almost immediately getting a dram of your choice shoved in your hands. Cheers! We immediately noticed a change to the previous year: Registering to visiting your plot has now become computerised with touchscreens helping you along the way. I prefer the handwritten certificates, but I can see it being a relief for the staff.

Something else was different: The year before we got miniatures of the cask strength 10-year-old (which I absolutely love) as the yearly “rent” for the plot, now they changed it to minis of the regular 10-year-old.
Sign of the boom and demand, I guess. Anyway, with our feet in the borrowed wellies and our GPS trackers engaged the three of us were on our way to find our wee plots of land and to mark them with Austrian flags. It took as quite a while and a few detours, but finally all three flags were stuck into the ground and it was time to head back for our tour.

Stevie was the tour guide on duty and a packed tour it was – lots and lots of people! No problems, though, as Laphroaig is a really spacious place. Quite a bit more modern than Lagavulin, too, steel, computers and switchboards everywhere. But, unlike Lagavulin, which gave up malting their own barley 40 years ago, Laphroaig still has its own traditional floor maltings, which produce about 15% of their yearly demand, the rest is made at Port Ellen. The distillery was silent, though, so we didn’t actually see the malting process and we were unable to enter the still rooms at all due to it getting a new roof.

A few tidbits of information about the production at Laphroaig:
– 14 tonnes of steeped barley per malting floor, taking six days
– Kilning is done with 15 hours of peat smoke using 100% hand-cut peat and additional 19 hours of heat for drying.
– A traditional three waters per mash and 55 hours of fermentation
– 32 people working at the distillery – including the visitor’s centre
– Cuts are: of 74-70% foreshots, 70-63% heart run, 60(?)-1% feints

The final distillery tour on this very beautiful and hot day was at Ardbeg. But first it was time to sit down in the Old Kiln Cafe and grab a bite to eat to recover from Lagavulin and Laphroaig. Well, no recovery needed for me, as I was driving, but I was already feeling the weight of all those sample bottles I filled… Highly recommended cafe – Jackie and her team prepare great food at moderate prices!
When it was finally time for our tour – we were in for a treat.

Our guide was Neil, for the second year in a row and he immediately recognised my brother Johannes and myself from our visit the previous year. After the packed tour at Laphroaig we were a small and intimate group once again, together with a bunch of Swiss guys. You know, Ardbeg feels a bit weird to me, as if there were two worlds. There is the public, marketing side to Ardbeg, the one you get to see from the outside at home and which I’m not the biggest fan of. And then there’s the OTHER Ardbeg, the one you walk into and experience in person. I much, much, much prefer this second version, especially when touring with a guy like Neil, chatting on about Ardbeg, Islay and the world and completely losing track of time and space. I think that tour lasted twice as long as scheduled, ahem…

Anyway, Ardbeg was nicely renovated at the end of the last century after having fallen into a state of disrepair. They managed to keep the flair of the place alive – it still feels like an old-style distillery and you can see more people working at the same time than, say, at Caol Ila and Lagavulin, with even ladies from the visitor’s centre being instructed in carrying out different tasks at the production site.

A few bits and pieces of information about production at Ardbeg:
– Ardbeg once was the biggest distillery on Islay with an annual output of 400.000 litres of pure alcohol. Nowadays it’s at 1.2 million litres (if nothing breaks down).
– 1977 was a very bad year with full production and not one order in the books
– While Ardbeg was silent, casks were removed for the Long John blend until 1999

– the renovation was costly, at 3 Million GBP
– Since 2003 no more casks are sold to blenders or bottled as single casks.
– In 1860 there were 60 people working at the distillery and until 1990 it was legal to drink on the job
– Their Bobby malt mill is one of only seven left and there are no more spare parts
– Dairy cattle eat the peaty draff (solid remains after mashing) all year round – not used for beef cattle. There’s also a problem with cows refusing to eat too highly peated draff… 😉
– In the summer distillation can take up to two hours longer due to the condensers on the outside of the building working inefficiently in the heat
– Spirit cuts are taken by hand, not by a computer
– The flavour profiles of the bottled product can vary per batch and they take care to allocate them to different countries in a way that each different country always gets batches of similar style.
– All casks are used (only) twice

I could go on and on here – I’ve got many pages filled in my notebook with notes from Ardbeg, too many to list all here. Suffice to say, it was a very interesting and insightful tour with a long finish in the tasting room, where we also got Gillian, the only girl from Bowmore working at Ardbeg (don’t tease her about it 😉 ), to pour us samples of the Kildalton bottling. No notes on that one, sorry…

After such an eventful day we spent a rather relaxing evening back at the youth hostel in Port Charlotte enjoying home-cooked chili con carne and just hanging out, talking about our experiences.