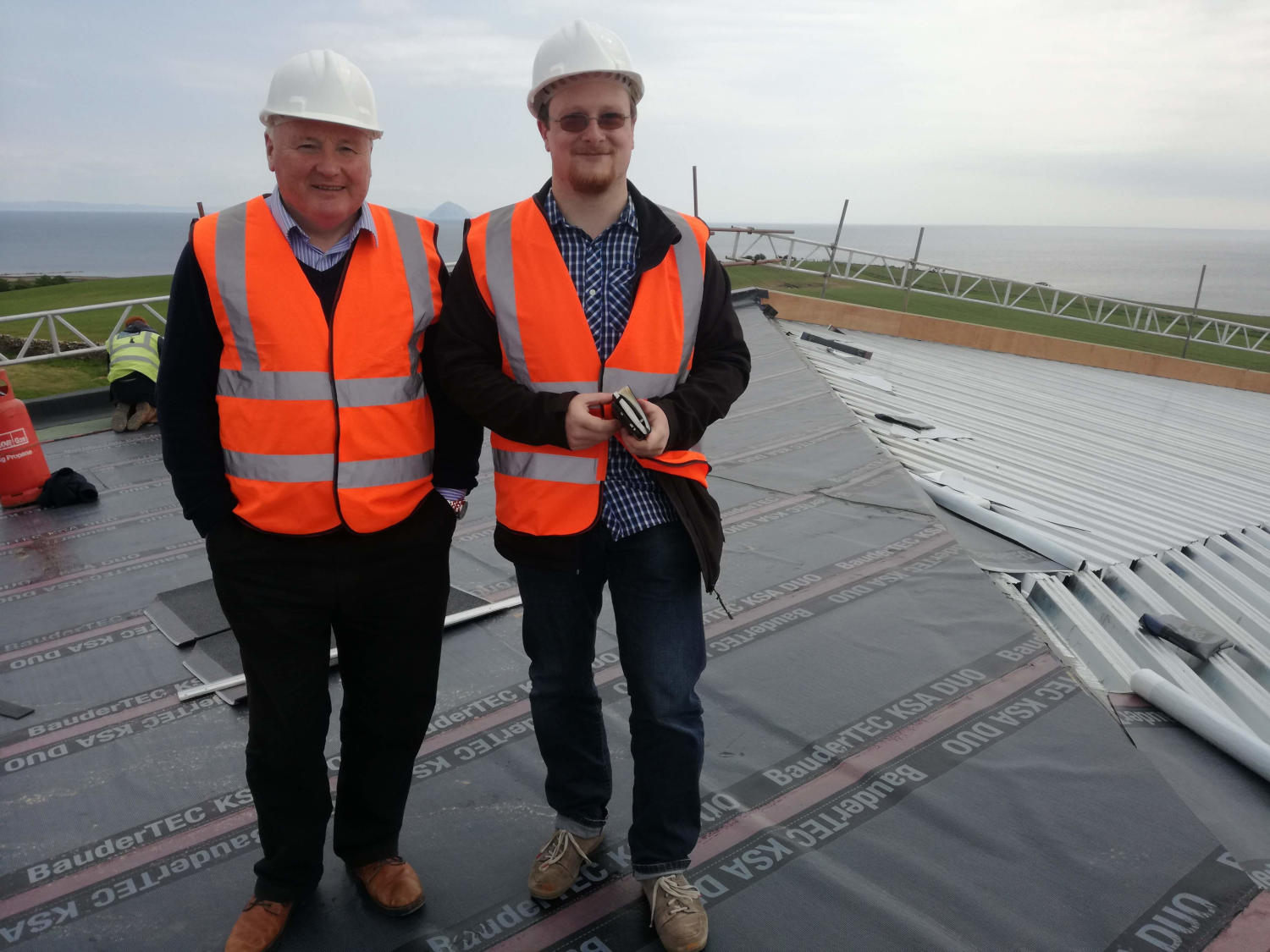 It’s the 22nd of May, 2018 and it’s been a few days since Jo and I left the Cotswolds Distillery in England. I’m once again sitting in Jo’s zippy Maizy Mazda sports car on a beautiful, sunny day – but this time we don’t need GPS navigation. We’re on the B-road that takes us from Campbeltown on the Mull of Kintyre, where we’re based for thewhisky festival, all the way up to Claonaig. From there we hop on the ferry to sail over to the Isle of Arran to catch an appointment with distillery manager James MacTaggart.

What’s new at the Arran distillery?
I’ve covered the Arran distillery before, so this will be a quick update. The distillery, originally opened in 1995, was recently expanded. The visitor’s centre is now more open and feels more spacious than I remember it. (I did miss the bottle your own cask, that used to be located in the shop section). The production site was upgraded as well: They installed a second pair of stills in order to potentially double production capacity. Usually, such an upgrade would be a major undertaking – and it was – but the still house was already built with this upgrade in mind. If you didn’t know you couldn’t tell that there are now four stills where there were previously only two. Both sets of stills are charged by four washbacks for fermentation – with space for future growth by adding another four washbacks to fully utilize the capacity increase provided by the two new stills. Currently (as of May 2018) the distillery is producing about 600.000 litres of pure alcohol annually, run 5 days a week, which leaves quite a comfortable room for growth, if needed.

I guess the big question now is: If you’re not utilizing the maximum capacity of your distillery (yet), then why build a new one on the other end of the island? How does that make sense? The answer to that is a tad more complicated – and one for distillery manager to talk about. James has just arrived from two consecutive ferry rides from his native island of Islay and gives Jo and me a warm welcome. He is a calm, humble man with decades of experience in the whisky industry and there’s no lack of topics to talk about while he drives us to the Lagg construction site. And so he takes us through the history of the Lagg distillery project. Every distillery needs warehousing space. In previous years and decades (until 2012), a significant number of casks for the Arran distillery were matured off the island – due to a lack of on-site warehousing. Building new warehouses in Lochranza, where the distillery is located, is difficult, so they started to look elsewhere, finally finding the site at Lagg. There is space for six warehouses at a capacity of 11.000 casks each (for comparison: There are now 25.000 casks at Lochranza in total). Three of the warehouses are already finished – and one of them is already half full (as of May 2018). The warehouses, however, could only be built if they also built a distillery on site, which answers the original question. Initially, James mentions, they only looked at building a small “craft” distillery to the requirements, but when you’re already building a distillery it makes sense to do it right and look further ahead.

We’ve now arrived at the site, where we are greeted by the on-site manager, Gordon, who hands us hi-viz vests and hard-top hats. Gordon is a tall man who doesn’t leave a single question unanswered and we quickly chat about all the different aspects of the new distillery – much more than I can scribble into my notebook.
Looking across the site you can see how the new distillery will fit in well with the surrounding soft hills, sitting at the edge of the sea with a view of the (apparently nudist) beach in the distance. The building will have a sedum roof – but it’s a bit more accentuated than that of the well-known Speyside distillery so there’s no need for repeated further “Teletubbieland” jokes. To the left of the distillery, we’re led into an orchard – lots and lots of apple trees will supply fruits to be turned into cider and apple-based spirits, which will also be made alongside the whisky.

Speaking of whisky, “we are looking for a heavily peated, Islay-style spirit” says James. The new distillery at Lagg will produce solely peated spirit, with the Arran distillery switching to producing only unpeated whisky once the new plant is up and running. In his modest way, James doesn’t go into the specifics of the spirit – he’s got experience enough to know you can plan for certain aspects, but the true character will be revealed – and dialled in – once the stills start producing. The malt for the distillery will be at 50 ppm, provided by the maltings in Glenesk. As far as the peat is concerned, they are looking into using Arran peat, but that’s not set in stone yet. Maybe one day there will be a whisky made using Arran peat and Arran-grown barley?

Just like the Arran distillery, which was built with expansion in mind, the Lagg site will be no different. To start out with, the distillery will feature two stills (10.000-litre wash still, spirit still), a 4-tonne mash tun and four washbacks – with room for four more washbacks and a second pair of stills. Thinking ahead to future needs while keeping things reasonable to start out with is something that’s apparent when looking at both sites. Initial production at Lagg is projected to be at about 200.000 litres of pure alcohol per year – which, while quite small by industry standards, at 1/3rd of the Lochranza distillery’s annual production, is quite an increase in heavily peated spirit.

When touring distilleries – even if they’re only construction sites – you can get a good feel about the vibe of a place. How close or distant does it feel? Just the week before our visit to Lagg, Jo and I took a look at the construction site of a new distillery on Islay – where we were led on a path in a safe distance from any construction work, not coming anywhere near the actual buildings (which is why there won’t be an article on here about it). And now we’re in the middle of the building. Just next to us workers are busy pouring concrete while we make our way up to the roof – where work is also carried out left, right and centre. Enjoying the great view from the top our visit is almost coming to an end – Jo and I need to get back to Campbeltown. One day just isn’t enough to visit Arran – we will be back once the Lagg distillery is up and running!

So there you have it – the story of a distillery that wouldn’t have been built if there hadn’t been a need for warehousing space. Funny how things sometimes work. Lagg is just one of many distilleries currently under construction in Scotland (and worldwide), all of which are driven by rising demand for Single Malt whisky and an industry-wide boom. I hope future demand will secure the feasibility of not just the one, but two distilleries on Arran, especially looking at how both sites at the moment won’t operate anywhere near their full capacity.

The new distillery will be opened in Spring 2019 – at the time of writing (December 2018) the stills are already in and everything looks good to go. In a way it’s also James MacTaggart’s legacy – he’s planning to retire at the end of 2019. My last question to him was what he was looking for in creating with both distilleries. James’s modest answer: “To produce a good single malt and provide a good experience for people who make the effort to come by.” Well, they’ve more than proven they can make a very fine drop in Lochranza – I expect no less of the new distillery!

This tour of the Arran and Lagg distilleries was provided free of charge. No other form of compensation was provided and as always full editorial control was retained by myself.