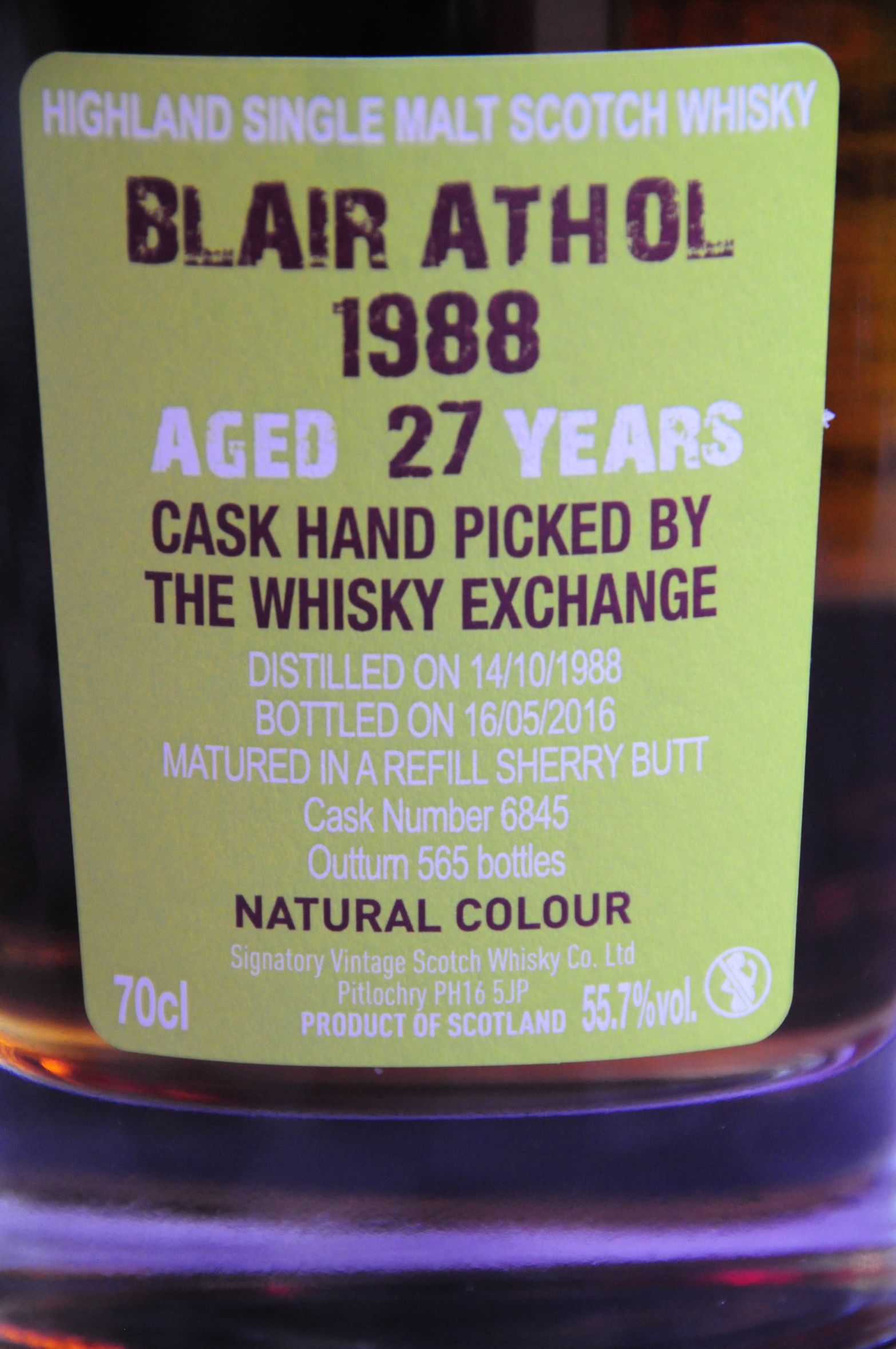 Another set of samples from one distillery – Blair Athol in this case – are sitting on my desk and my e-mail inbox is full conversations with Keith Wood. That can only mean one thing: A sequel to the first series where we tasted six different Talisker drams is in the works.

Four drams from this one distillery, all distilled just a few days apart in the year 1988 but matured in different casks (all of which were butts of different ies) and bottled between 25 and 27 years of age, which should yield some rather interesting comparisons. All bottles were entered into the 2016 Malt Maniacs awards, so if you want to go ahead and compare our scores to the ones by the official judges, head over to this page.

Keith
Here we go again with Klaus, four Blair Athols, classic malt glasses and over a century of maturation; this 25y is one of three Signatory editions bottled for Taiwan and has a lovely, deep golden – bronze colour. On the I’m getting toffee, loads of it, perhaps even hints of butterscotch. It’s like a toffee apple without the apple. There’s also aged wood and then a suggestion of nuttiness, yes walnut and even something that suggests cognac-marinated maltiness, if that’s possible. That walnut- comes across strongly on the palate accompanied by a malted toffee-ness. It’s rich, very rich and has a distinct tingly pepperiness alongside a creamy mouth-filling presence. The finish is long with plenty of that peppery nuttiness. I just love this whisky with the elements of toffee, walnut & maltiness. Not quite a “Great” but well worth 89 points from me.

Klaus
A lovely dark amber-ish colour presents itself in my usual Classic Malts glass. On the nose, it’s restrained – in a good way. Just a slight hint of oak tannins, with notes of orange liqueur, wine gums, mint chocolate and a touch of dried kitchen herbs. Do I also detect a whiff of freshly struck matches? On the palate, the alcohol is there, but well integrated. Okay, a few seconds in you can really tell the nearly 60%. Hold , let’s add a couple drops of water! Ah yes! Mouth coating but on the dry-ish side with orange liqueur, wine gums, sultanas, sweet plums. Don’t forget a touch of tannins and dried kitchen herbs. The long finish (diluted) is throat-coating and big with orange liqueur, sultanas, wine gums and plums with a lingering base sweetness and just a touch of dryness. A subtler dram initially, but it gets bigger and sweeter with time and water. A rather lovely style of sherried dram that deserves a score of 88 points.

Klaus
“Wine treated butt” Oh my, that’s the most technical description I’ve heard in a long time – and what does it actually mean? Just a butt that was treated with wine and nothing else? Or an ex-Sherry but that had been used for whisky and was then re-treated with wine? Weird in any case. Only one way to find out – by sticking the nose inside the glass containing the red-amber looking liquid. On the nose we’ve got strawberry, raspberry, molasses, plum jam and just a dash of tannins and mashed grape seeds. Hmmm, okay, a bit weird but agreeable. On the palate, there’s a gentle arrival at first before medium dry notes make an appearance. Moderately thick in texture, too. Again, we’ve got a mix of strawberries and plum jam with just a dash of grape seeds and grape skins thrown in. And what’s that in the background? A few random spices are kicking around and… some cask char smokiness? The long finish is big upon swallowing, rather on the dry side with a gentle fruit sweetness (strawberry and plum jam) being in sync with the slight grape seed bitterness. Overall, this is a bit strange for a whisky but not unpleasant overall. I think “agreeable” sums it up just well. Score: 83

Keith
I agree with Klaus here about the colour being rich amber perhaps with a hint of copperiness. The nose initially offers me lots of fruitiness, something dark and rich like black cherries. It’s also suggesting a dry bitterness to come on the palate. I actually like the nose even if it is slightly unusual and a difficult one to define. The palate is indeed dry but not exactly bitter, thankfully. There’s toffee again, maltiness and even a tingly pepperiness. The finish is long offering more of what I found on the palate. Yes, it’s hard to fathom, unusual with massive influence from whatever they did to the cask with whatever wine, but it’s one I find rather pleasing, unusually as I don’t generally like whisky being interfered with by wine. On my first tasting I suggested a score of 87-88 but after a second tasting I’m bringing that down to 86 points.

Keith
Aye a similar colour to the last one, was this Butt “treated” to the same wine maybe? Well, what a difference in the nose, my initial thoughts are very medicinal in a kind of way. I love what does but I’m not a great fan of the smell, especially in my whisky. the -ness disappears after a few moments to leave a mustiness and almost rubberiness alongside an obvious suggestion of (young) fruity red wine. The palate is dry, very dry and almost suggests aged wood marinated in Apricot wine. Please tell me they didn’t actually use Apricot wine. Damson too perhaps? Again I get a long finish, perhaps just a little too long. All I can say is the orchestra needs a conductor to get all the instruments playing in unison. It’s not terrible, just disjointed for me even though I like some of the elements which me to give a score of 81 points.

Klaus
Another one of these – with an identical shade of amber. Let’s see. Err, yes, we’ve got wine. Red wine, wine tannins, grape skins and mashed grape seeds with a whiff of rubber tyre. To be fair, there’s also liquorice and… strawberry and blackberry fruit spread. Quite a bit of alcohol too. Hmmm… I’m not sold yet, let’s try the palate. Oh, very dry with loads of tannins, grape skins and grape kernels, liquorice, blackberry juice and maybe some dark chocolate. The medium long to long finish has an alcoholic kick upon swallowing, soon followed by dryness with a bit of sweetness thrown in for good measure (a puree of blackberries and overripe red grapes with an extra dose of seeds). Okay, you can probably tell I’m struggling with this, it feels like a slightly sweetened and beefed up red wine more than a whisky. Well-made if you’re into this sort of thing, but you really have to be – and I am not! Score: 77

Klaus
Light amber in colour. Sticking my nose, in I’m greeted by oak tannins paired with herbal notes (Thyme anyone?), dried dates, old mushed banana, traces of fresh and spent coffee and chocolate with orange peel. A tight, dense package that’s fun to . The arrival is gradual and quite dry, with a noticeable alcohol punch. The dry tannins are back, so are the herbs, paired with dried figs, sultanas, dark chocolate, spent coffee and, again, the chocolate (medium dark with chunky bits of orange peel). The medium long is dry, tannic with herbs and just a mere trace of sweetness. Well, this is a rather lovely sherried dram. The oak has been so overwhelming you wouldn’t guess the distillery, but that’s kind of the purpose with sherry bombs, so… Score: 87

Keith
Pale amber in colour this last example is the oldest by a couple of years and my first impressions from the nose are that I just walked into an olde worlde sweet shop where the sweet (very sweet) aromas of childhood favourites greet you from open tins. Oh yes, that’s sweet in a quite way. Suddenly the sweetness fades and something resembling, but not quite coffee-ish appears. Oh no, when I get to taste this I find another childhood memory, this time of that strange chicory-based coffee substitute which in the UK went under the name of “Camp Coffee”. Dreadful with water but I went through a period of liking it when mixed with boiling milk. Perhaps more kindly is a suggestion of those squidgy coffee creme chocolates “all because the lady loves ….” This one’s a sherry butt without too much sherry influence although it is there as suggested by hints of dark fruitiness, chocolate- and (almost) coffee-ness. I like it and it’s worth 86 points from me.

Keith
The 2016 Malt Maniacs Awards saw these four Signatory CS Vintage bottlings all from 1988 being submitted. They were bottled at ages of 25y, 26y, 26y & in the case of TWE 27y. Two of the three bottlings for Taiwan are declared as “wine treated butts”, the third for Taiwan and the one for The Whisky Exchange are refill sherry butts. OK, I’ll ask; what the hell are “wine treated butts”? Although I quite liked (wine treated) cask 6846 it was definitely strange, or shall we be kind and say different? Neither I nor Klaus was impressed with cask No.6804, it was all over the place with no real continuity or balance which is strange as this is a sister cask to that from The Whisky Exchnage (No.6845). OK, so TWE’s cask is declared as refill sherry butt and is a year older, but I’m also guessing there’s been no winey meddling to this one, just good old (or young) sherry. Surprisingly the best of the bunch for us both was the youngest, if 25 years old can be called young when it comes to whisky. Not surprisingly it was also a non-wine-meddling good old sherry cask with loads of character beyond just sherry-ness. So the moral of today is ……… aye, you guessed ……

Klaus
So, what have I learned today? I still have no idea what wine treated butts are supposed to be, apart from that it has something to do with butts (ex-Sherry ones?) that were treated (for how long) with wine (which wine? Sherry is wine too, technically…). Other than that I know that I definitely won’t buy one blind – both were weird, one just a bit and one decidedly so. I am glad to see that Keith is on the same page as me! Another thing we have in common is our winning dram of this comparison – the youngest one in the mix and the one with the most and least extreme cask influence. Sometimes less is more.

Well, if you’ve made it to the end – thanks a lot for reading and let me know your thoughts in the comments section below.

To read Keith’s version follow this link – and make sure to check out the other sections of his impressive archive!