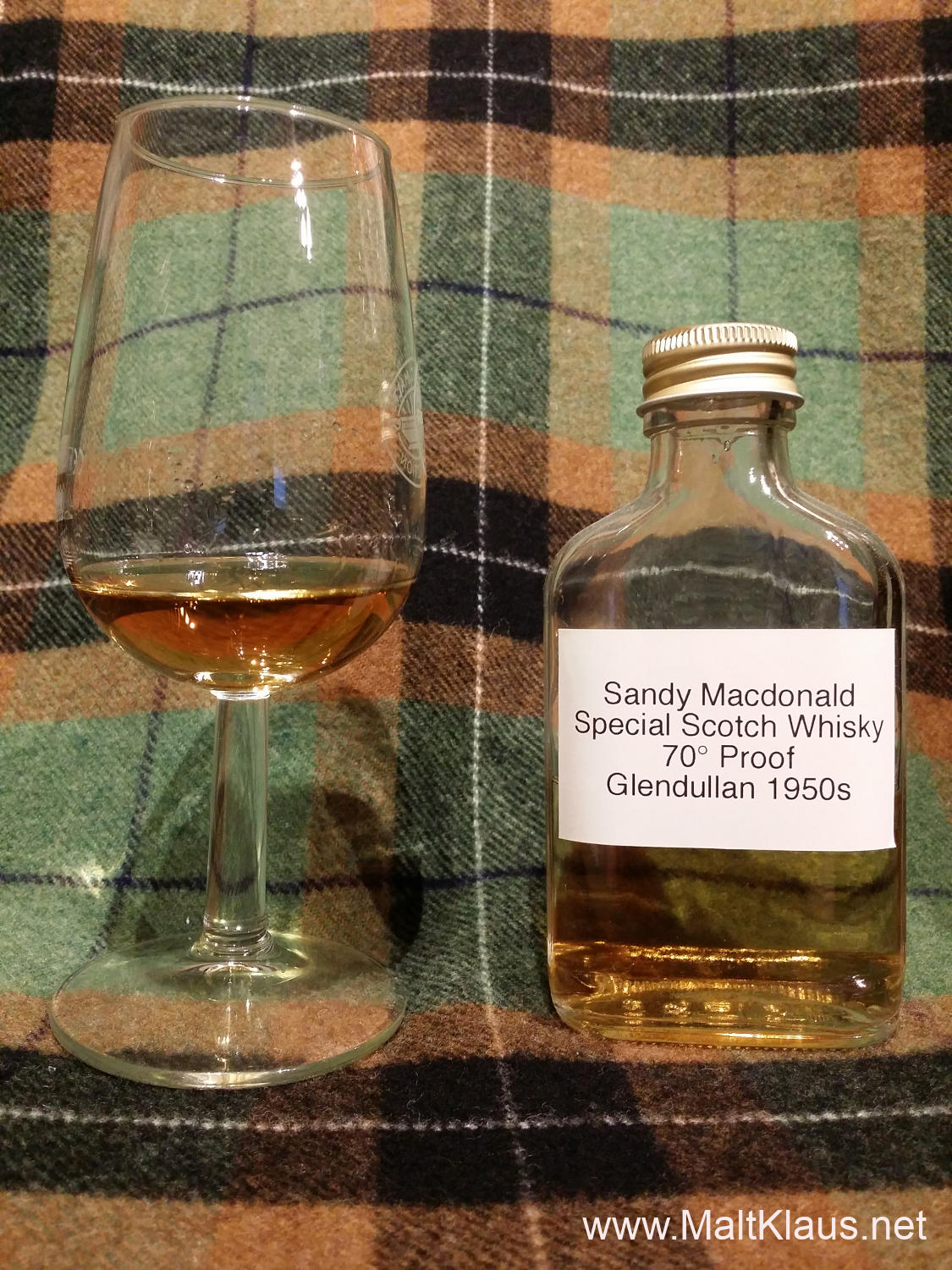 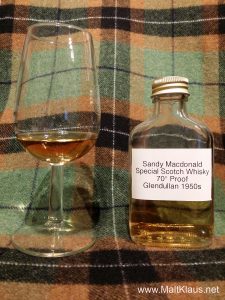 Preparing for my 2017 Scotland whisky trip, I think this old oddball whisky will be just what the doctor ordered. It’s a ca. 1950s bottling, with a spring cap. There’s not much info on the (original, not the pictured sample) bottle, but after some research it seems to be a blended whisky, which highlights Glendullan as the “pure malt distillery”. Is it the only malt whisky in the mix? I have no idea, but it might just be – other bottlings from the same era feature several distillery names on the label. Let’s nose and taste it and see if it’s as interesting and intriguing as it looks!

Tasting notes:
Colour: red gold
The nose is quite peculiar. A slightly alcoholic tingle up front with a hint of menthol. Light and fresh – very well-preserved! There are notes of lemon zest, orange oil, lychee, melissa, white peaches on a light backbone of honey, toffee and a hint of machine shop with oil and a sooty chimney. After many minutes in the glass, a cognac-like note emerges in the background.  The palate is also slightly alcoholic on the arrival and the slightly oily and sooty notes, as well as menthol and melissa, are much more apparent than they were on the nose. While quite thick and chewy for a 40% ABV whisky, it is on the dry side. The fruits, which were present on the nose, are nearly gone, replaced by more melissa, some wormwood, burnt toffee, over-stored dark chocolate and… cardboard-box stored rhubarb? Come again? Hmmm… very interesting and entertaining. The medium-long finish has the same alcoholic note upon swallowing, before it dries down considerably, leaving notes of soot, melissa (more the green, grassy, plant-based impression this time), oily cardboard, dark chocolate and a hint of toffee.

Verdict:
Tasting these old blends is always a fun experience and you oftentimes taste things you rarely ever taste in modern whiskies. No wonder – production techniques were much more manual, direct-firing of the stills was much more common (or, rather, the norm), different strains of barley (or other cereals for the grain component) and yeast were being used etc. This particular example is no exception and it shows how tastes have changed – nowadays blends are styled to be almost nondescript and almost bland so they don’t stick out in mixers. An enjoyable dram, indeed, one to decipher, and leagues above today’s standard supermarket blends, though probably not as dangerously quaffable.

Thanks to malt mate Michael for the bottle share!