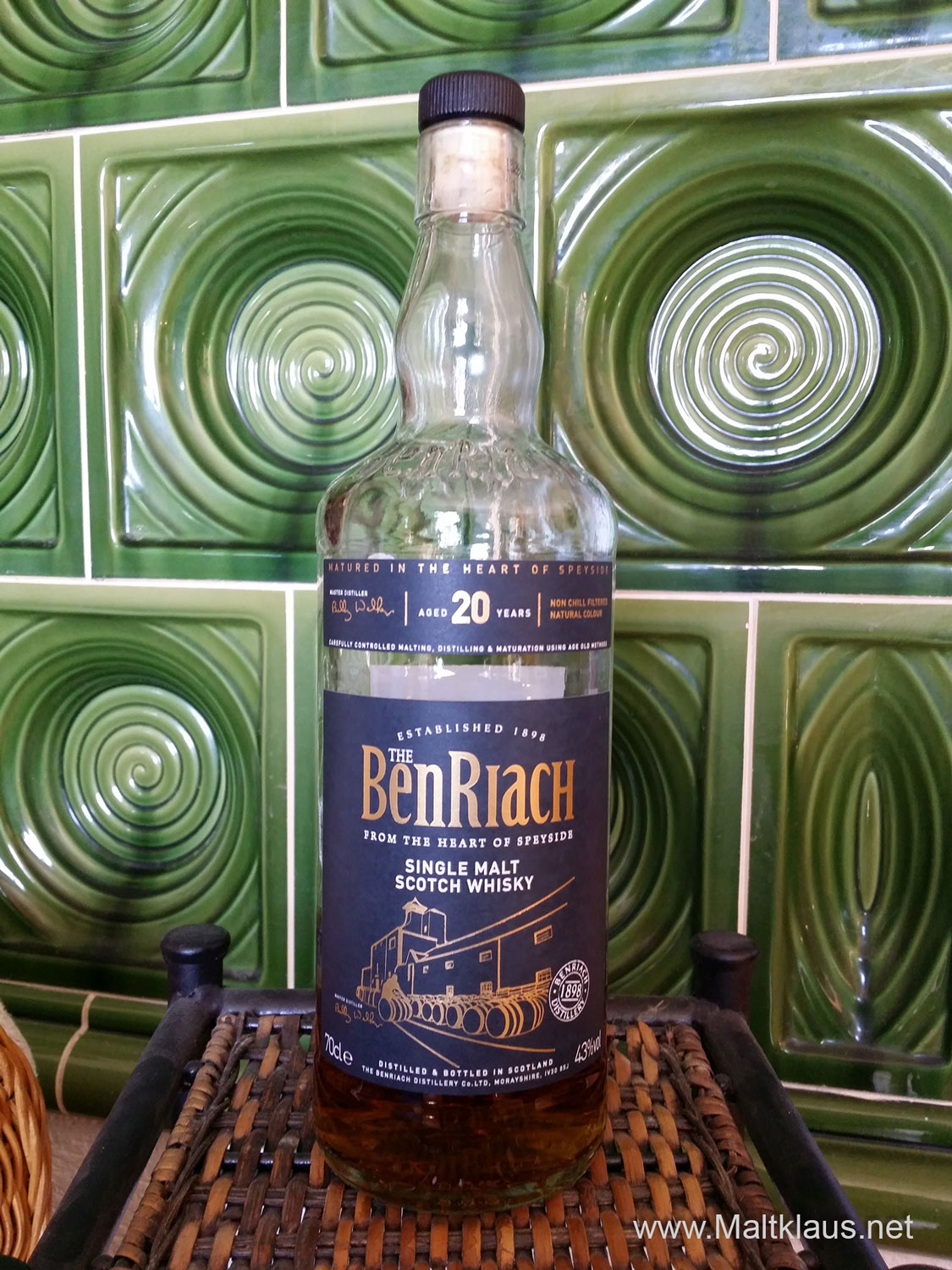 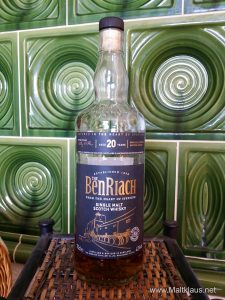 It’s been quite a while since I last had a Benriach, a distillery I’ve often had a bit of trouble with (with exceptions, such as the rather nice daily dram the 12 yo is). So let’s try this 20 year-old sipling!

Tasting notes:
Colour: amber
The nose is very promising upon first contact, soft and mellow, yet rich, with an “aged” base and heavily sherried! Old banana, banana chips, vanilla sauce, sweet grapes, some pickled ginger, fresh figs, rum-soaked plums and juicy sultanas. The fruity component rests on a bed of slight cask smoke, a whiff of dunnage warehouse and spices – cloves and cinnamon come to mind. Rich, juicy, fruity and dark, without too much wood, just about right for a 20 yo dram.
The palate is equally mellow on the arrival, but it does feature a spicy/chilli touch. And there we go again – my personal struggle with Benriach. It almost feels like a blended malt, not a single malt, it’s a tightly woven pattern of different aromas without a clear direction, and on top of it all it feels just a tad too weak at 43%. We’ve got a spicy component there, pickled ginger, allspice, cloves and chilli. We’ve got a fruity component, a puree of assorted dried, sweet(ish) fruits which is hard to pick apart, we’ve got a sweet honey component, a slightly nutty component and we’ve got a hint of oak. On the third sip, I just tried to enjoy and drink it instead of dissecting, which worked considerably better. The medium-long finish is equally mellow with just a slight chilli and ginger component upon swallowing, followed by a sweet dark fruit puree, with spices and a hint of oak appearing later.

Verdict:
Another difficult Benriach for me. Certainly a very good and enjoyable casual sipping dram with loads going on, but it feels a bit overly blended for a mellow mass-market appeal to me, lacking a more precise, defined profile (but then again, isn’t it a defined profile that I oftentimes seem to struggle with Benriach? Hmmmm…). If you like your Benriach, it’s certainly well worth picking up, especially seeing they haven’t gone completely bonkers price-wise for a 20yo whisky, which is very nice to see!

Thanks a bunch to Keith’s dregs for the sample!