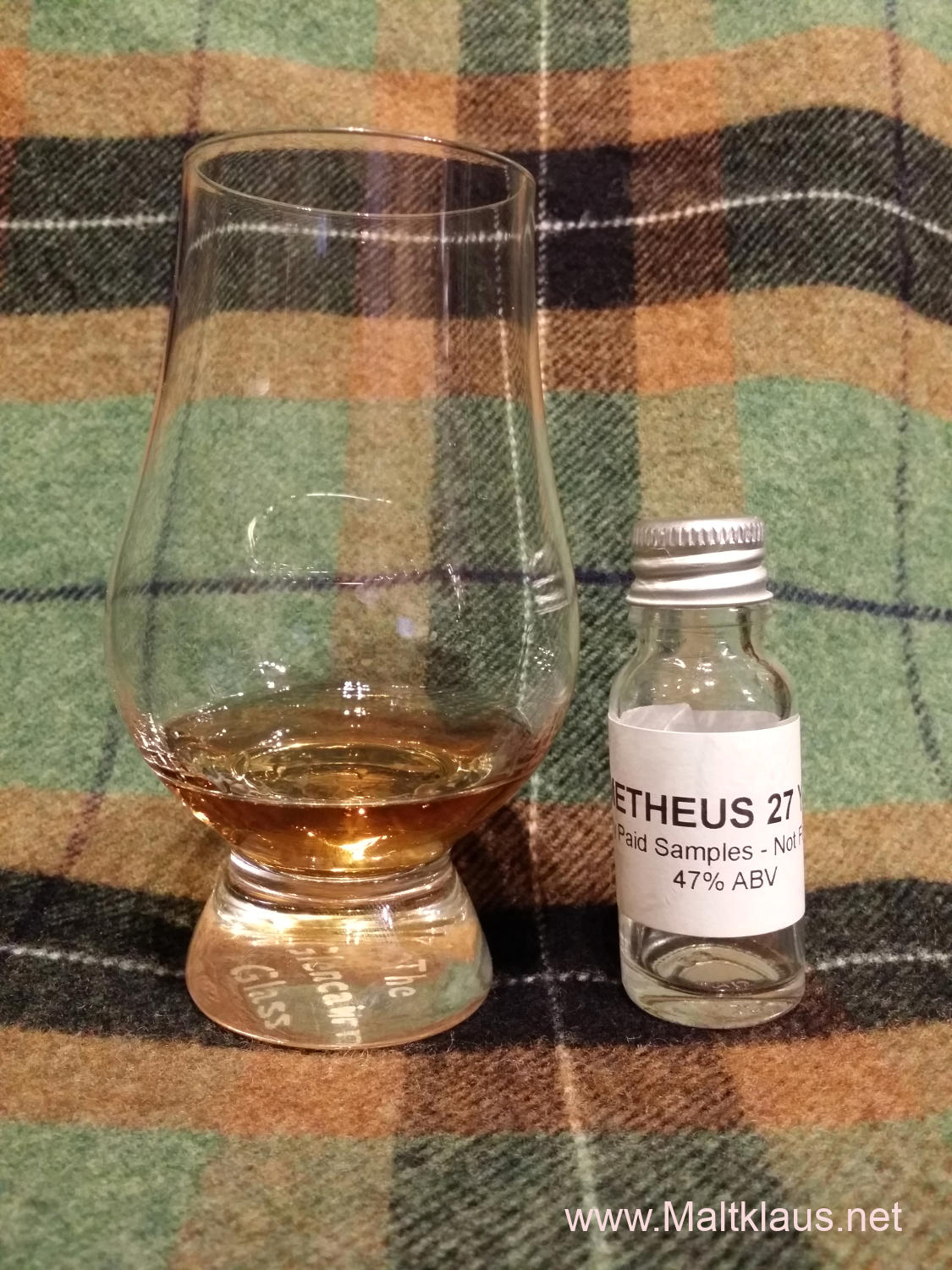 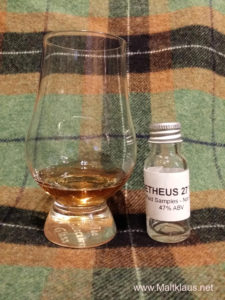 Tasting notes:
Colour: amber
New distilleries need a source of revenue while they wait for their own stock to mature. Besides making gin and selling casks of spirit the Glasgow distillery company has also secured a number of casks with aged stock from an undisclosed Speyside distillery which they now release on a yearly basis. The plan is for the final release to be a 30 yo whisky. So let’s take a look at the 27 yo, their second release, which has been out for a while now. I had a chance to try it at a company presentation in Speyside this year and also got a sample to take away for an in-depth review.
On the nose you can immediately tell the fresh European oak sherry casks this whisky was matured in. Spicy notes in the foreground – Cinnamon, allspice, cloves, dried orange peel – almost like a spice mix used for mulled wine. Speaking of wine, there are also dry tannins, but not too much. The background layer is formed by notes of dark bitter chocolate, fresh leather shoes and a dark, moody, condensed, slightly burnt dark fruit component (plum spread and figs for the most part). You can tell it’s a vatting of quite a few different casks by the amount of depth involved. Distillery character? Errrmmm… it reminds me of Glenfarclas, that should give you a rough style comparison. Not saying it is Glenfarclas, though… Up next: the palate! Oh! Quite an arrival there! Spicy, white pepper, almost a chili catch with the mulled wine seasoning we’ve already encountered on the nose mixed in as well. The dark fruit mixture, dark bitter chocolate and sweet sherry notes with a touch of oak in the background only play second fiddle here. At 47% ABV I did not expect that. When the initial “wow” and punch fade away (after half a minute or so) what remains is a more fruity (dark fruits), mellow, quite tame mixture. Not a dram to leave in your mouth for too long, best swallowed while the initial kick still lasts (but that’s what almost everybody will do anyway). The long finish is also quite spicy (orange peel and the mulled wine spices I mentioned before) upon swallowing and on the dry side. A dark, condensed fig and plum fruitiness appears a few seconds in, drying down to a just perfect (not too much, not too little) lingering oak note.

Verdict:
Oh ho! After 27 years in (European oak) casks, this dram still packs a punch! Loads of spices involved here, the fruity (sweet) notes are there to balance everything out but they clearly play second fiddle. I did not expect that intensity from a 27-year-old whisky. Probably just about right for a young, upcoming, energised business, though 😉
A comment about the price (currently about 700€), you say? Well, they do have a young business to keep running, you have to view it at least partly as a fundraising dram. (How about a voucher for a bottle of their first 3 yo release to be included with the Prometheus 28? Just an idea…).

Thanks to the Glasgow Distillery Company for the sample!