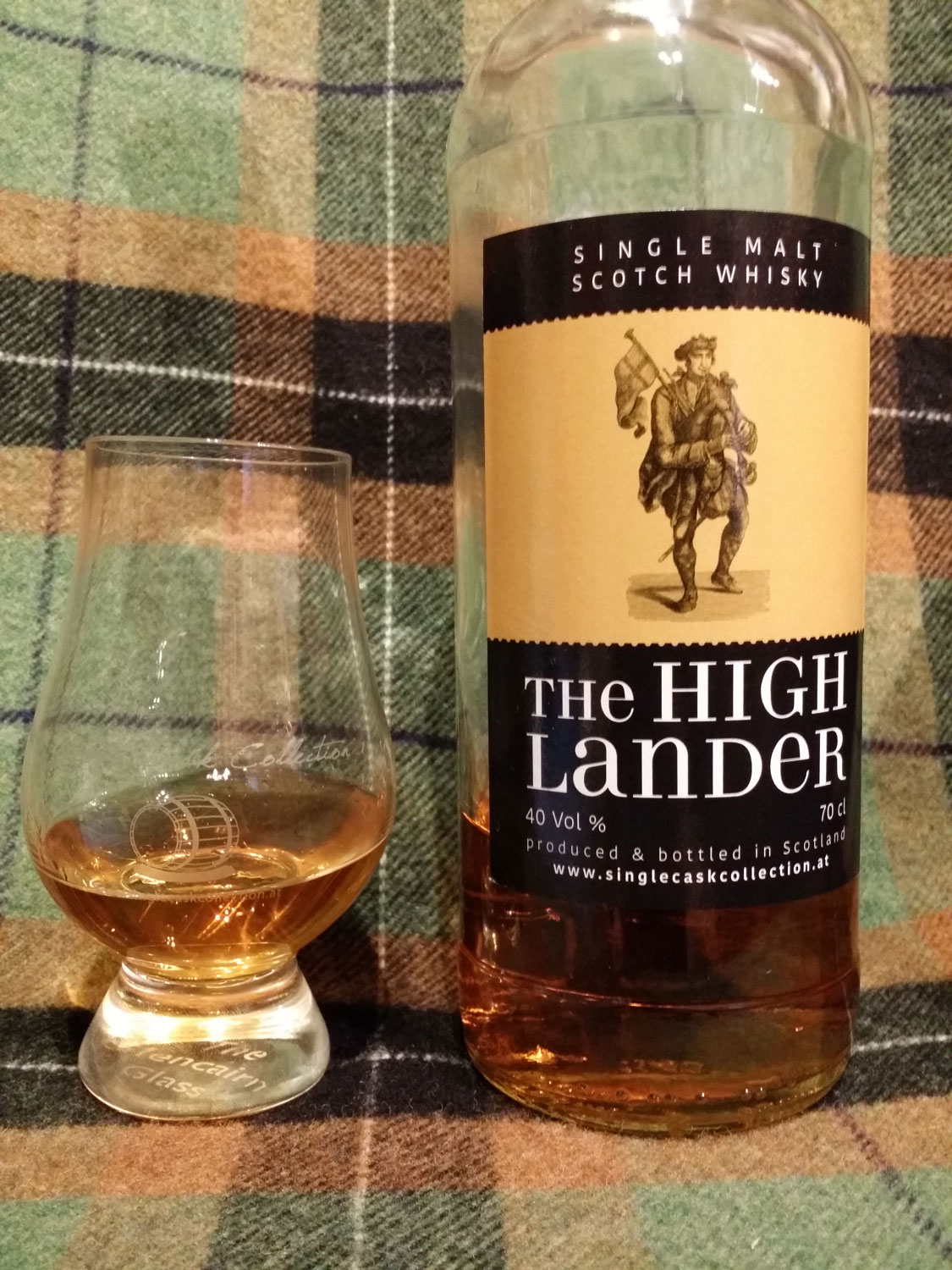 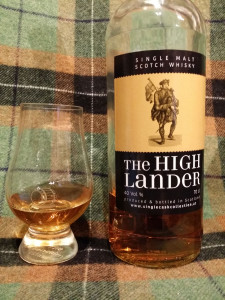 Tasting notes:
Colour: orang-ey amber
Right. So we’ve got a “Single malt Scotch whisky” in the glass and that’s the only thing we know about it. Despite the name “The Highlander” I don’t know whether it actually is from a Highland distillery but chances are high since the Highlands also include the Speyside region. Well – there’s no other way to find out other than sticking my nose into the glass! Right off the bat the nasal receptors say “Clynelish”. A creamy, light vanilla-fudge note (as is so common these days) accompanied by the dirty, waxy, oily Clynelish character. I could be wrong, it could be the cask, we’ll never know, but that’s the type. Speaking about cask: It feels too round to be a single cask, there’s both ex-sherry and ex-bourbon in the mix. Back to nosing: Heather honey, raisins, milk chocolate, a hint of ginger and a botanical garden in full, sweet bloom. For a NAS dram it certainly doesn’t nose like 3 years old, more like 10 in pretty good wood and not too diluted by watering down to 40%. That’s quality stuff for just a handful of coins – just a bit over 25€ if I remember correctly. Puts most other supermarket NAS drams to shame! But let’s not get ahead of ourselves and move on to the palate. Right. Quite a bit flatter than the nose, shame about the 40%, but it’s made to appeal to many casual quaffers so they’re forgiven. Give it a bit of time and you’ll get heather honey, heather, caramel, milk chocolate with spicy nuts and wax-covered raisins (what?) with bits of ginger sprinkled in. Quite dark and mysterious, actually, (as much as 40% ABV allow it), I’m very positively surprised! The medium-long finish glides down very gently with hints of spices, sweet malt, honey, heather and traces of caramelised flowers (yes, indeed!).

Verdict:
Now that was a very unexpected surprise! Surprisingly complex and “aged” for what it is – a 40%, chill filtered and most likely coloured low-price, undisclosed, no age-statement single malt scotch whisky. Very quaffable, nothing “off” about it – this stuff puts the newfangled big-brand NAS whiskies which flood the markets these days to shame. TO SHAME! Well done indeed!

Cheers to my brother Peter for the sample!