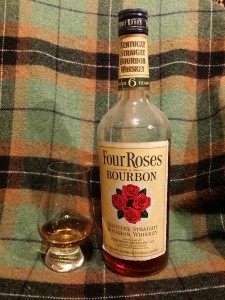 This post is dedicated to grandparents who don’t really drink “hard stuff” and stash bottles they once received as gifts for decades in their cellar! Cheers!
Tasting notes:
Colour: amber
The nose opens with old vanilla pods – the kind you left lying around over night, all scraped out. Overall light, yet flavourful. Slightly alcoholic with an acetone tingle – a common occurrence in Bourbons, not influenced by decades in the bottle. It is, however, quite a bit more mellow than modern bourbons, soft and gentle, not as loud on the corn nor the cask influence and with gentle spices (cinnamon and cloves) not usually found in American oak.

There’s a very light earthy and metallic note in the background which could be due to influence from the cellar, which was also used to store vegetables, potatoes and the likes – hard to say without a direct comparison.
The palate is initially light and quite watery, getting stronger by the second. Old vanilla pods again, hints of sweet corn and spicy rye, a rather dry character. The spices are back – mostly cloves. Also notes of rose water, ginger and liquorice. Just like the nose, this feels a bit more mellow and balanced than modern variants, with intermingled flavours which are hard to pick apart. The short but pleasant finish has a slight alcoholic note mixed with vanilla-infused corn syrup sweetness upon swallowing before getting drier at the end.

Verdict:
It’s hard for me to pin down how old this bottle is, probably from the 80s, not younger than the early 90s. It was bottled in Austria, as it was the norm back then, to bring tankers of the stuff in for domestic bottling. Apart from a slight metallic and earthy hint on the nose – which I can’t be sure where it stems from – there’s no impact from the long storage at all. All in all it is a slightly more mellow and refined bourbon than most on the market today, very intermingled flavours, but at the same time light in style and influenced by both corn and rye in the mashbill (at least that’s what I could taste…). Always worth checking old cellars and hunting down old bottles from yesteryear…