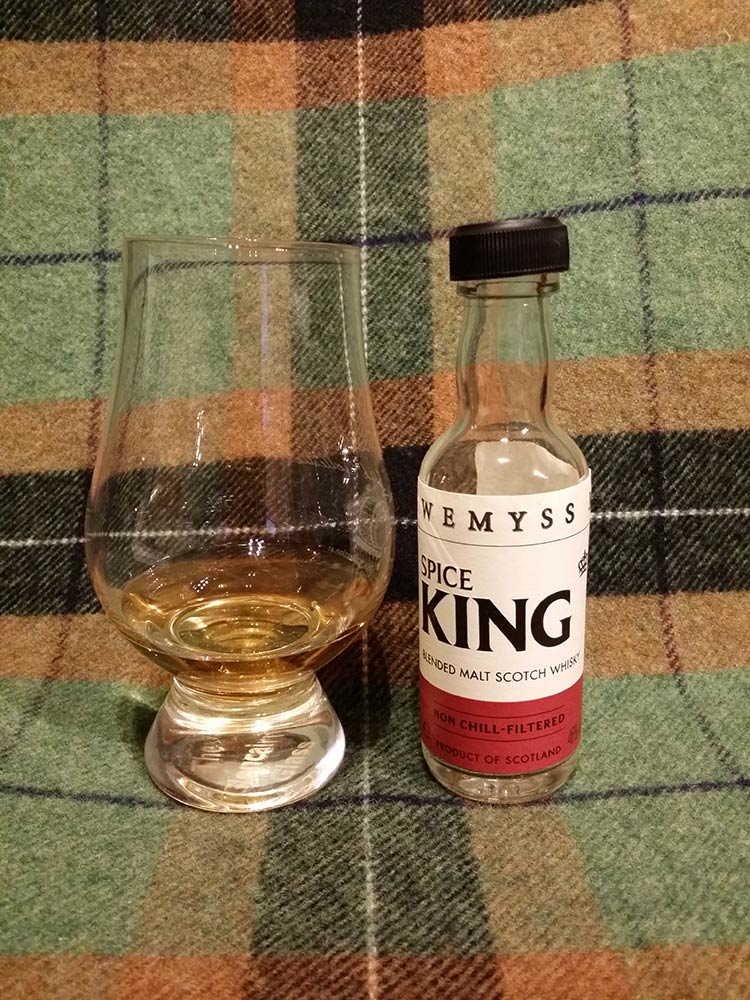 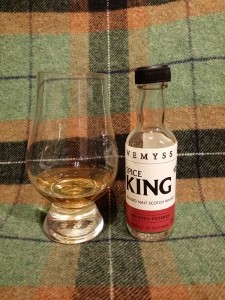 Tasting notes:
Colour: reddish gold
The nose starts with vanilla, lingering honey and orange peel. There are also black pepper, chocolate, coffee, a tiny amount of peat smoke and some brine. Hang on, where are the eponymous spices? Let’s investigate further!

Ah yes! A dark, moody, woody, earthy component starts to appear after a while, adding depth – but I wouldn’t really call it spicy. Maybe a cinnamon stick and some cloves used for the second or third time. Nicely layered due to well-matched components making up this blended malt, though. Let’s see if we can find the spices on the palate. Lots going on here, quite dense and creamy after the initial alcohol blast with citrus notes wears off. Some light smoke, vanilla, wood honey, caramel, dry sherry, cocoa, third-use cinnamon stick and star anise with an oaky, earthy, slightly charred layer underneath. More on the dry than on the sweet side. The malt components are flavourful, but not the oldest (there is no age statement) – I’d guess about 10 years on average. The medium long finish is quite hot with notes of citrus, spice and honey upon swallowing, mellowing down to a sweet-dry combination with a woody, malty aftertaste.

Verdict:
This dram was part of the Wemyss Malts #WemyssTT4 tweet tasting, organized by Steve Rush @thewhiskywire for which I was chosen as a participant. As my palate wasn’t on its best that night I chose to retaste these drams one by one at a later time.
The “Spice King” is yet another well put together blended malt and the upgrade to 46% ABV from the previous 40% versions is very welcome and noticeable, even though they lost their previous 12-year-old age statement. Quite layered and deep on the nose with a spicy, dry, initially (a bit too) fierce palate and a respectable finish it works very well and comes at a wallet-friendly price point.